Colin O’Brien’s photographic journey began in 1948, and since then he has been photographing Londoners, capturing the drama of their day to day lives. The series East London Life, an expressive collection of black and white photographs of street scenes in East London from past to present, is currently showing at Unit G Gallery, London. We speak with Colin about his practice.

A: London is the backdrop for many of your photographic series, which highlight the profound change it has undergone in recent years. Do you still see beauty in today’s London and will it always remain home to you despite these changes?
CO: The changes are in many instances unsympathetic. Developers have to take into account the history of an area and the sensitivities of the people who inhabit that space today; if they don’t, then it is up to us to protest and challenge them. Some of the new developments are initially disliked and suffer much criticism and outrage, but over a period of time they often become more accepted and appreciated.

But let us remember that change is not just about buildings and architecture.  London evolves in many ways; things such as transport, leisure activities, sport, but most importantly it is people who change the environments they inhabit. They offer new skills and talents in the worlds of entertainment, the arts and the vast varieties of food and cuisine that is made available to us because of London’s huge multi-cultural population. London is a great cosmopolitan city that is always evolving, always changing.  What it is good at doing is assimilating change and constantly re-inventing itself.  This is what makes it the great city it is. At certain times the city has a stillness and beauty about it, but mostly it is on the move, at times frenetic, exasperating and tiring.  But for me it is where I was born and where I grew up and it will always be my home.

A: Your current exhibition East London Life showcases a variety of black and white photographs that depict street life in London.  Have you since experimented with colour photography in a similar way?
CO: I started using black and white film because in the early days that was all I could afford.  Colour film was available but it was much more expensive, plus there was the price of the developing and printing to be added to the initial cost of the film.  With colour I had no control over the creative process; the developing and printing were left to laboratory technicians. With black and white I could process the film myself and make prints relatively cheaply.

Nowadays with the advent of digital photography colour is much simpler to use than it was when only film was available.  Today when I shoot commissioned work such as fashion or portraiture I often use colour. If I could go back to when I first started taking pictures and could have made a choice between black and white film and colour I still think I would have used black and white.  There is no substitute for film, the pictures have a rawness that it is impossible to produce in any other way.  The power and presence of a black and white grainy image always wins out, both emotionally and technically as far as I am concerned.

A: As someone who began photographing everyday life from a young age, how do you feel that this early experience has informed your practice as an adult?
CO: I think the taking of photographs teaches you lots about the people and the surroundings you grow up in.  I accepted the status quo in those early days just after the war.  I played on the bombed sites, but I didn’t feel in any way deprived.  I felt safe surrounded by my family and friends. The thing about being poor is that everyone helps everyone else, not necessarily financially, but in many other ways.  It was this behaviour that fascinated me, made me observe people more closely. The process of looking has, over time, enabled me to capture the commonplace events which might otherwise have gone unnoticed. Even today there is nothing I enjoy more than observing and photographing the ordinary everyday events that happen in life.

A: Perhaps your most famous photograph from the series is that of the Clerkenwell car crash.  What do you think draws people to this photograph?
CO: I think what people like about this particular picture is its cinematic quality. It resembles a carefully crafted cataclysmic scene from a movie. In our imaginations we realise the drama as it is played out.  Firstly the noise of the crash, then an eerie silence and the sound of people gathering.  Then in the distance ambulance bells ringing, the taking away of the injured people, the sorting out of disrupted traffic and the removal of damaged vehicles. Finally the clearing up of broken glass and debris until all evidence of the incident has been removed.  The junction reverts to normal, waiting for another event to disturb the orderly flow of traffic; waiting for a sequel, which is bound to happen, sooner or later.

Once at an exhibition of mine where I was showing this picture a man came over to me and asked how long it had taken me to set it up.  I was never certain if he was being serious or just having a joke at my expense.

Credits
1. Colin O’Brien, The Accident, Clerkenwell, 1962.  Courtesy of the artist. 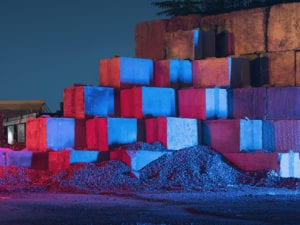 The Aesthetica Art Prize returns with artworks making sense of our changing world, responding to digital identities and global constructs. 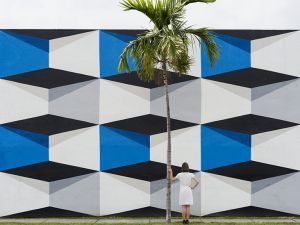 Anna Devís and Daniel Rueda’s images redefine the conventions of structural photography with an aesthetic inspired by metropolitan living.