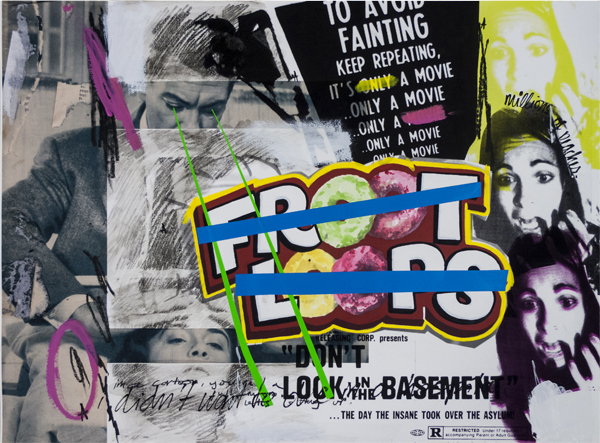 Stuart Semple’s Anxiety Generation opens at Delahunty, London, 13 November. Running until 4 December, Semple focuses his language of sampled popular culture, intense imagery, song lyrics, direct humour and text towards a very defined agenda of playing the image world at its own game. Just as poignant, potent and outspoken as any of his previous projects, the exhibition of painting will be presented in his trademark colour-fuelled style. Aesthetica speaks to Semple about his love for painting and the collective anxiety of young people today.

A: Anxiety Generation is quite a unique title, where did it come from and what does it mean?
SS: I suppose it comes from the idea that my generation and the generation younger than me have some kind of collective anxiety. I think in a way that this has been dumped on us. We seem to live a very violent existence and that’s probably perpetuated by imagery and this strange, digital, interconnectivity we have.

A: What can audiences expect to see in this new exhibition?
SS: It’s the first purely painting show I’ve made for quite some time. I have produced a whole series of new paintings, about 20 of them. They deal with the effect the moving image has on us; they look at violent, sexual imagery; they touch on Grindhouse cinema and a period of Italian erotic movie making. There’s also a strong discussion about digitalisation and the pace at which that evolves without us having a chance to really consider it properly. I see this constant information flow as something quite violent, yet something we are so used to; that we almost crave. There’s also a thread running through it about how the image world, which I believe we live in, depicts and often distorts the human body. I think we’ve developed quite an unhealthy acceptance of this violence which has caused a base level of anxiety.

A: Your previous show, Suspend Disbelief was an immersive installation. What made you want to return to painting?
SS: It’s not so much a return to painting. I think of myself very much as a painter even if I am working in film or sculpture. However, the last few projects have been much more immersive and about an experience. My last show had a lot of video and interactive sculpture. I think if anything this show is more of a return to the gallery and the formality of the white walled space. For many years I’ve been utilising public areas and off-site spaces, making happenings and interventions. I think the subject matter of this show has really dictated the media it needs to be in. I’ve found that if I take imagery out of the media-flow of time and paint it, it really changes how we see it. Painting things gives them a timelessness and the viewer a bit of distance. Painting really is the only artform that doesn’t have a fixed duration. In dance, moving image and music there is always a start and an end. Painting has a permanence which is very interesting. Painting is quite an uptight tradition and it still has a sacred, untouchable status, so bringing these kinds of images into it seems to show how shocking they really are, which we miss when we see them on Youtube or Instagram for instance.

A: What do you want your audience to take from these new works?
SS: I don’t really have anything specific that I want the audience to take from what I do. I’ve just tried my best to capture a moment that I think is very crucial. It feels to me like we are on the edge as a culture and we can go either way. More fear – or something more organic and humanistic. I suppose that if anything I hope that the language I’m using in the pictures is understood. I think, as with any kind of information or experience, it’s really up to people to decide what they want to do with it themselves.

A: These works draw on popular culture, intense imagery, song lyrics, direct humour and text; are you often inspired by multiple things rather than just one significant influence?
SS: Of course, it’s being alive. I think there’s so much that floats into our experience all the time. All these elements make us who we are, make us unique. Some seem to move me to want to paint them. There’s a lot of disparate inspiration in the work, but rather annoyingly no matter what I make there seem to be themes that keep popping up that I just can’t shake. This idea of true anxiety and isolation. Even if I think I’m doing something else, I’m actually coming back to that. I can’t even paint a Kyle Minogue lyric without subconsciously doing that. It’s bizarre.

A: What do you have planned next?
SS: I’ve already started work on my new series of things which will be for my first show in LA next year. 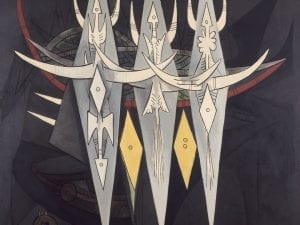 The EY Exhibition: Wifredo Lam is a major exhibition at Tate Modern, London which explores and identifies with the cultural and political contexts of the Cuban artist.