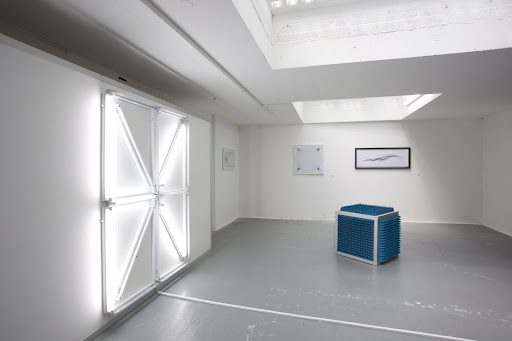 Tucked underneath an ordinary yellow-bricked housing development, like so many now trailing the canal in East London, is a rather extraordinary space – in another life it was probably an underground car park, but today the Kingsland Road Studio has been furnished with whitewashed beach huts and from 10 – 13 June, Presence Absence, the first exhibition here with energetic works by four young London artists. The Kingsland Studio is the offspring of a small collective of photographers and designers who, as well as stashing themselves away in a hardback-lined corner of the blanched space, provide a place for creative peoples to create and present their art. Zachary Eastwood-Bloom, James Irwin, Brendan Olley and Alida Sayer are the lucky quartet chosen to inaugurate the studio, of which one half is taken up by pleasantly calming typographical and geometric installations and the rest of the space housing the more disruptive tendencies of the artists.

With absence and presence expressing fundamental stages of being, the title suggests something either very, very literal, or, as it turns out, a much more complex exploration of the everyday and the intangible. Visitors are wowed on entry by James Irwin’s large light installation, a simple starburst of fluorescent tubes, which, on closer inspection and a little fiddle with switches on a podium, allow the viewer to illuminate different bulbs to form letters of the alphabet. Another of Irwin’s works on the opposite wall mirrors this phosphorescent display; this time the flick of a switch alternates lights from spelling ON to reading OFF. Simple, but providing endless fun for those confident enough to approach the switch.

And while these pieces may physically dominate the space and heighten one’s attentiveness, they are simply a primer for works by the other three artists. Zachary Eastwood-Bloom has engineered shape landscapes using technology; they exist purely as virtual plains until they are translated into real, tangible objects. An antique table is partly chiselled down, the dining surface taking on the form of a shallow geometrical mountain range. These landscapes reappear in We Control the Horizontal and the Vertical where layers of Perspex sheets have been cut to another of his digital designs.

Swapping geometric panoramas for typography, Alida Sayer manipulates text by cutting, printing and projecting to explore the way the viewer looks at 3D objects. The largest installation at the Kingsland Studios and Alida’s first large-scale work, There Is No Beginning, which she describes as three dimensional stilled animations, shows letters and words trembling inside a large frame where the letters have been cut on to acetate many, many layers deep. Exploring the idea of the unknown and confusing perceptions, Brendan Olley is the only one of the group to take on the moving image. In a short performance piece, Brendan plays a piano to an isolated mountain in the Russian Artic. The sound does not, and probably never will make it to the mountain. It’s one of those silencing videos and a calmer contrast to Irwin’s more obvious communication through his light sculptures.

Four artists couldn’t have combined so effortlessly: their medium and method all very individual yet somehow united in their geometry and the idea of tampering with the norm. The preoccupation with technology, communication, perception and memory is evident, and one supposes that the exhibition naming alludes to the way that the artists seem to really explore the simplicity of the everyday and the ways to reveal its possible forms.

True to its nomenclature, however, the exhibition takes these notions of time and memory a little too far by showing only for a fleeting 3-day period: present one weekend and absent the next. No doubt the Kingsland Studios will find plenty more promising tenants in the months to come, this has been an excellent taster of what is to come.

Next up at Kingsland Road Studio is a group exhibiton of photographic and video work from 2 – 7 October. 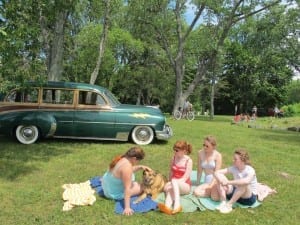 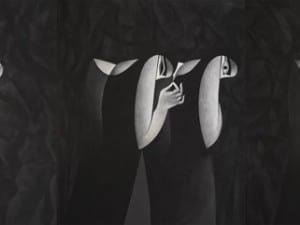 Review by Alex Tieghi-Walker Tucked underneath an ordinary yellow-bricked housing development, like so many now trailing the canal in East London, is a rather extraordinary…