Wandering through the ancient cedar forest of Yakushima, Jacqueline Hassink realised just how addicted she had become to her cellphone and the inner peace achieved when she set aside the device. The Japanese island is amongst a number of the planet’s dwindling “white spots” lacking wifi and cellular coverage, six of which the New York-based photographer documented for the Unwired project (2010-2017).

The work was physically demanding. To travel deep into the forest, Hassink and her assistant hiked for nine hours with a Pentax 6×7 camera and equipment. “I spent so much time of my life in Japan, in Kyoto and Yakushima. I am mesmerised by this really old forest. When you’re walking in the forest and the moss and these really old trees that are thousands of years old, nature becomes much stronger than you as a human being, and that becomes a very powerful experience,” Hassink says.

The arresting stillness of these huge prints – some measuring 160 by 200 cm – is compounded by the transitory nature of the moment they captured. There’s a summery mist and small ice formations in Nordvest-Spitsbergen National Park in the desolate Norwegian arctic islands of Svalbard and a babbling brook on a hillside of Iceland’s uninhabitable Vatnajökul volcanic glacier, places only accessible in the warmer months. Hassink deliberately used analogue film, itself a vanishing medium, to create these images of inner silence she likens to as “Buddhist experience.” Whilst economics drive the existence of remote white spotlike these or in northern Kenya, where people travel dozens of kilometres to get to a hotspot, there are also artificial ones such as a luxurious digital detox spa in Baden-Baden, Germany. Interior scenes have Hassink exploring the relationship between inside and outside, a theme central to her previous project, View, Kyoto (2004-2014). Blue paint peels off the walls of a desolate gymnasium where a pommel horse and old landing mat echo the once bustling activity of Pyramiden, an abandoned Russian mining settlement in Svalbard. Unwired Landscapes is part of a broader multimedia project, White Spots, that has seen Hassink team up since 2013 with documentary filmmaker Bregtje van der Haak and information designer Richard Vijgen to create a white spots world map, app and documentary.

An almost polar opposite approach defines iPortrait, an accompanying all-digital series. Using her iPhone to surreptitiously take around 900 pictures of commuters hunched over their own smartphones in some of the world’s busiest cities erased the discomfort Hassink usually feels when photographing people and focused on their body language. No unsettling gazes here – they didn’t even notice she was there, busy as they were engaging in that most communal yet parallel experience of our times. Even in the most crowded of subway cars in London, Moscow, New York, Paris, Seoul, Shanghai and Tokyo, it only takes these tiny machines that have become an extension of our own minds to live the moment in isolation. What first inspired Hassink to examine this kind of exclusively private experience in crowded public places was the sight of a kimono-clad woman intensely focused on her cell phone as she stood at a restaurant in Kyoto. What might appear to be an incongruous, contradictory scene is actually commonplace in Japan, but it’s also one of complete detachment. Absorbed as she was in her phone, the woman was momentarily cut off from her surroundings, despite the device’s promises of connection.

During a recent exhibition at the Nederlands Fotomuseum in Rotterdam, visitors had to remove their shoes and mobiles before entering a darkened space with the images projected on the walls alongside information identifying the subway system and ambient sound. The installation, which travels next to the MAST Foundation in Bologna, was “like entering a temple,” said Hassink. “That’s when the story started – people were talking to each other.” 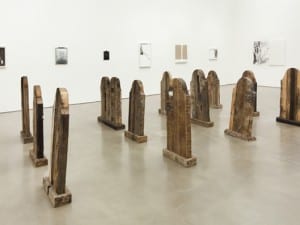