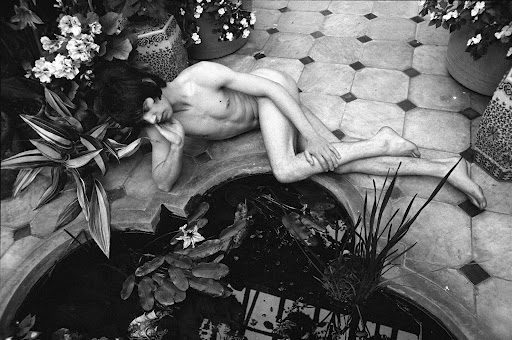 The Greek myth of Narcissus has captivated Western civilization for centuries: an exceptionally beautiful, though proud and precious youth disdains all those who love him and falls instead for his own reflection in a pool, refusing to leave the image until he dies and is changed into a flower of the same name. The myth’s enchanting and interlocking themes of self-obsession, self-image, and image-obsession have proved irresistible to artists and writers throughout the 20th century and remain so today. Guest-curated by the Manchester-based Art Historian David Lomas and Surrealist expert Dawn Ades, the current exhibition at the Fruitmarket Gallery dips a toe into Narcissus’s pool, surveying the ripples and refractions of the myth in the work of a range of Surrealist and contemporary artists.

At the heart of the exhibition is Salvador Dali’s painting Metamorphosis of Narcissus (1937). There’s always a thrill when a mega-star painting is seen on loan outside of its usual environs, and this painting is no exception. No matter how familiar the image is from reproductions in books, magazines, posters and postcards, there’s a frisson of excitement at seeing the painting in the flesh: the kneeling torso that doubles into a deathly hand holding an egg, sprouting a flower, the group of naked suitors and the young man perched atop a box on a chequered floor, his hips shunted out, his back turned. The electricity or aura the painting produces is of course itself tangled up in the Narcissus myth- the relation an image bears to its original. What makes this particular exhibiting of Metamorphosis of Narcissus special is that the curators show the picture alongside preparatory material and alongside Dali’s accompanying poem, which was intended to be read in conjunction with the painting, but which have rarely been shown together. Giving a sort of commentary or dramatization of the image, the poem is the picture’s own, integral reproduction, a reflection on a painting that’s fundamentally concerned with reflections.

From an artist as well-known as they come, the exhibition moves on to an artist who ought to be much better known in the U.K. and an image that’s rarely been seen outside of the San Francisco Museum of Modern Art. Jess (1923-2004) was a San Francisco-based collagist, partner of the poet Robert Duncan, and along with the New York-based artist Joe Brainard, a major influence on the prominence of the collage in American art of the last fifty years. Jess’s Narkissos (1976-91) is an imposing six foot pencil drawing that Jess worked on for much of his artistic life, and which many argue is unfinished, destined to remain unfinished, the delicate intricacy of its pencil lines appearing as if to vanish in front of the eyes. For Narkissos, Jess worked with found material, everything from magazine pages to postcards to medical textbooks to cartoon strips and photographs of statues. He then reproduced these images by drawing them on paper and pasting them on a large support. The fabric of the image is a gloriously textured surface of copies of copies, an image made of images, traced out in graphite pencil.

Willard Maas (1906-1971) is another American artist (filmmaker and poet) whose work is little known in the U.K, eclipsed by the experimental films of his wife Marie Mencken, and if he’s known at all it’s for the film he made of Andy Warhol’s Silver Flotations in 1966. It’s an event, then, to have the chance to see his 59-minute film-poem Narcissus (1956), a strange and haunting retelling of the narcissus myth, swapping the traditional pool for hand mirrors and explicitly exploring homosexual and heterosexual desire, self-love and the desire for fame and posterity. Desire so hot it melts the rubbery mask of lead actor Ben Moore as he scrapes around a desolate mixed-messages landscape, part 50s New York, part last days of the Roman Empire.

Lomas and Ade’s curatorial style is subtle and connective, a part of the show’s pleasure is in the dynamic and connections between the works of artists from different time periods. Maas’s film was an influence on James Bidgood’s more famous filmic reinterpretation of the myth, Pink Narcissus (1971), which isn’t included in the exhibition but whose luxuriously saturated palette is clearly echoed in Sip My Ocean (1996), Pipilotti Rist’s atmospheric underwater video installation that spans round a corner in a darkened room, blue cushions splashed out on the floor. The duplicate films mirror each other, meeting in the room’s corner which, as Lomas writes in the catalogue, forms a “seam” between the two screens. Two images of the same floating figure converge in the middle to become something else, distinctly genital in some cases, and floral in others. The soundtrack to the film is a self-consciously naïve rendering of Chris Isaak’s song Wicked Game, blossoming into a doubled track, one sweet, one in desperate, screaming, angry crescendo. It’s a gloriously indulgent, and sexy film, an onslaught of seduction, set to loop and almost indiscernible when it restarts, like a trap; on my visit, people sat transfixed for a least two rotations, as if glued to the seabed, staring at the pool Narcissus-like.

Equally captivating, in the adjacent space, Yayoi Kusama’s installation Narcissus Garden (1966) is a room filled with silver balls, little reflective spheres that bounce reflections off each other, creating myriad images of the viewer as they walk through the ‘garden’, a meadow of multiplicity, of obsession. Taking on the colours and features of the viewers’ clothes, the balls have a kaleidoscopic, floral effect, even as they’re lifeless, and deceptive, skewed reflections of the self. The effect is remarkably calming, a dissolving or diluting of self consciousness, a dissipation into Kusama’s smooth and cool metallic environment.

Alongside the works discussed, Narcissus Reflected includes pieces by Cocteau, Claude Cahun, Florence Henri and Paul Nash and Cecil Beaton, among others. All are as bewitching as the myth they reinterpret. As an exhibition it’s characterized by it’s own form of reflectiveness, the meticulous thoughtfulness of its curators in displaying these works together and the imaginativeness and ambition with which the Fruitmarket has been able to secure loans of important and in some cases rarely exhibited works.

Image:
Cecil Beaton, The Narcissus of ’67: A Mod at the Waterhole of Reddish, 1968
modern silver gelatin print
Courtesy of the Cecil Beaton Studio Archive at Sotheby’s

Pauline Bloomfield is a textile artist and part time tutor. Based in Derbyshire, she has exhibited widely in both group and solo exhibitions in various parts of the country. In 2010 Pauline stopped teaching in adult education to concentrate on her work in care homes in Nottinghamshire and Lancashire. 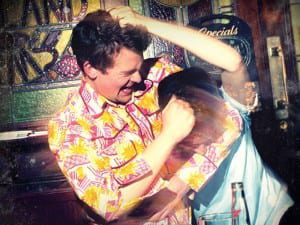 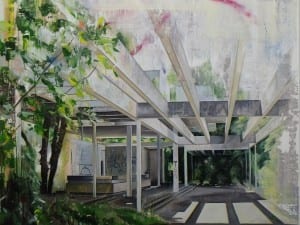 Lacey Contemporary Gallery is set to open this autumn in Notting Hill London. Placing its artists at the heart of the business, director Andrew Lacey intends to provide a positive environment for his practitioners to work in, allowing them to flourish and evolve over the years.