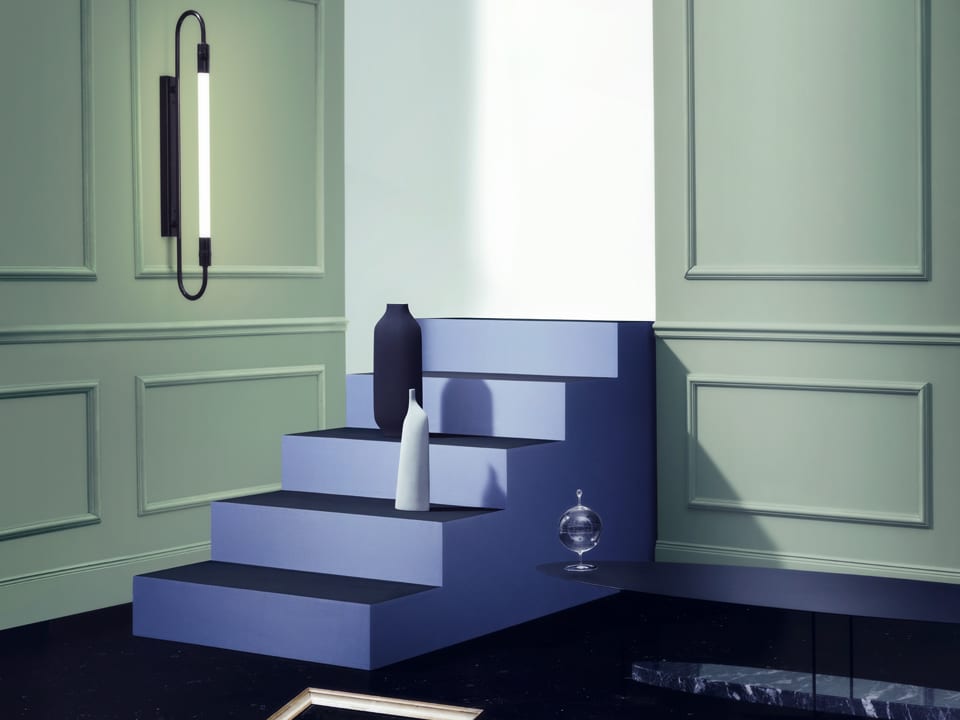 Stylised interiors offer an intriguing perspective on how set design can create an interdisciplinary stage for idea creation and collective aspiration.

Design is an indispensable part of life. Throughout the day, be it at work, at home or in public spaces, our activities are marked by the use of objects. The presence of such items is usually taken for granted as they meet the needs of our contemporary lifestyle so seamlessly. However, humanity’s passive engagement has sparked new contemporary thought.

Postproduction – Manual for Redesigning Reality, published by Royal College of Art, is one example. The manifesto critiques the growing functionality of design as it influences humanity’s behaviour: “Much of this brief was written in our living room. It was written whilst eating food ordered via an app, from a restaurant recommended by an algorithm, delivered by a self-employed bicycle courier who we tracked using the location services enabled on his phone. We paid in advance using a ‘hot coral’ coloured cash card produced by a ‘digital, mobile-only’ bank that was founded in 2015, before eating on a table, cut using a CNC milling machine, and based on an open source design. And whilst not a single aspect of this situation would have been possible a decade ago, none of it will seem particularly remarkable to anyone today. This is simply the shape of the normal in our time.”

Written by Nicola Koller, Thomas Greenall and Matteo Mastrandrea, the text reflects upon how designed products are now integrated effortlessly into our day-to-day thoughts and actions, thus offering a new type of lifestyle.

Elena Mora is an interior stylist and set designer who picks up on these ideas through generating compositions that are infused with emotion; she transforms objects into subjects. She notes: “I’ve always had a fascination with inanimate elements. I believe they keep stories and memories, and when we choose them, they have the capacity of representing ourselves.” As such, her works raise interesting questions, for example: how do items enter the world and why do consumers decide to take possession of them? Which aspects seem to play the decisive role – are they functional or purely aesthetic ones? To what extent are our choices influenced by current trends or well-targeted marketing campaigns?

Due to an unprecedented number of products, manufacturers and digital outputs, these questions have never been as complex as they are today. It is here that the words of Jonathan Ive – Chief Design Officer at Apple and Chancellor of the Royal College of Art – seems most relevant: “True simplicity is derived from so much more than just the absence of clutter and ornamentation. It’s about bringing order to complexity.” Thus, products that define our domestic and professional lives – such as the iPhone that we use to schedule meetings, or the television that we use to stream content – offer the possibility of effortless transitions between worlds. For entertainment, relaxation or work, successful design is imbued with potential – for any activity to be made possible.

Further to this, such designs can be revered for their intuitive technology and timeless style. As Deyan Sudjic, Director of Design Museum, London, writes in The Language of Things (2008): “We live in a time when our relationship with our possessions is undergoing a radical transformation … The aesthetic, sculptural quality of a glass or a chair, and the intellectual elegance of a typeface are creative expressions that we can appreciate in themselves.” Mora’s multidisciplinary practice offers a perfect forum for insight into this very subject. Originally from Italy but based in Hamburg, the designer celebrates the evolution of functional products into influential items: “Many design objects have become iconic and even when they are the result of an untold process, they tell the story of specific materials or lifestyles.”

With an impressive client list that includes global brands such as Adidas, o2, Philips, Volkswagen, Ikea and Audi, Mora creates a spotlight for detail – and offers surreal spaces that draw the viewer into a balance between subject matter and composition. The resulting works transport the viewer to stylish constructs of crisp interiors where bed frames, lamps and tables resonate with the increasing desire for minimal and seamless surroundings. The commissions, like the featured images from Wallpaper* and Icon, are informed by photography, installation and other visual arts. Moreover, telling the right story about a product means looking for the right environment. “Every single element must coexist in harmony and embody the message we want to convey”, she reflects. Through these multi-sensory and dreamlike interiors, viewers are encouraged to revisit the way in which they perceive their surroundings, paying attention to the details that make up meaningful ways of living.

Such commissions are part of wider dialogues about the influence of magazines in 21st century culture. Wallpaper* – established in 1996 – prides itself on being a “global design destination”, whilst Icon’s – established in 2002 – “shows you exactly what’s happening in architecture and design today, and what it means for the future.” Rather than showcasing products simply for their functionality or aesthetics, they build upon the appetite for humanity to be a part of something – looking into how design is changing to reflect the needs of society. If such magazines are trendsetters – inspiring and engaging with readers’ emotions – Mora’s commissions certainly meet these criteria. “Choosing products for my shoots is like celebrating the process of production; they become protagonists and tell new stories.”

As Roland Barthes proposed in Mythologies, (1957) metalanguages exist in everything from the books and paintings of high art, to the slogans, trivia, toys, food and rituals of contemporary life. These metalanguages move people to act in a certain way – note the global use of smartphones – and they are embedded in everything, including today’s designs, for example, the larger architectural spaces of city landscapes. Thus, designs have a significant impact on the ways that people think, and as such, curated spaces – whether domestic or urban – have the important power to influence different types of social behaviour.

Mora’s images are an excellent example of this; the photoshoots do not simply feed the growth of consumer culture but are a powerful fusion illustrating where art and commerce align. Objects are presented as agents of idea generation; they act as points of departure that shape tastes and raise aspirations, and there are three compositional factors that help to achieve this: colours, materials and light.

These elements are also reflective of Mora’s interdisciplinary approach in which each brief is considered through a diversity of perspectives, skillsets and visual techniques: “Many different references must be distilled into every project. I’ve always had a deep passion for interior design, contemporary visual arts, and many aspects of the vernacular: when studying a mood board, at times I find myself thinking as an art director, or a graphic designer, or an interior decorator. Every aspect of this process is important.”

The idea is to create an environment with narrative abilities that will be both eye-catching and intriguing. According to Mora, a key way to make people fall in love with a product is to communicate its mood effectively. Yet the striking use of colours depicted in the featured images is not the only aspect to be analysed here; the compositions are also characterised by a signature sense and manipulation of space. Since architecture is an important source of inspiration, sets become structural topographies in their own contextual right. “This very sense of scale, dealing with proportions of the dimensions, is not as easy as we might imagine”, she says.

Domestic items gain a completely new character thanks to their arrangement; within Mora’s representations they are dispersed amongst architectural elements – such as arches, stairs or wall fragments – to create smaller, self-contained vignettes. The highly stylised and polished environments are a journey into another world that is parallel to our own, filled with narratives yet to be written and actions which are yet to take place. Here, Mora includes the presence of the viewer. The settings serve as a playground for the audience’s imagination and each individual is invited to be a part of the space. As a result, the onlooker becomes a consumer of ideas.

Mora unfurls this notion further, proposing that her works provide powerful visual narratives, like stages waiting for events to unfold. “I want to create the illusion that something just happened or is about to happen”, she notes. In such a way, the viewer is compelled to become part of the composition. Combining aesthetically pleasing and meaningful components, the fantastical settings in the films of Wes Anderson and Sofia Coppola are comparable. The Virgin Suicides (1999) and Lost in Translation (2003) are built up around their locations – whether through shadowy suburban houses or anonymous hotel rooms. Moonrise Kingdom (2012) and The Grand Budapest Hotel (2014) offer similar intricate landscapes. Perhaps two of Anderson’s best-known films, they became iconic owing to their bold colour schemes and rich, complex sets. Undeniably, every detail is an anchor point for the narrative to play out for the viewer; the set design almost becomes part of the cast. Anderson has noted: “Usually when I’m making a movie, what I have in mind, first, for the visuals, is how we can stage the scenes to bring them to life in the most interesting way, and then how we make a world for the story that the audience hasn’t quite been in before” (Interview for Collider, 2012, Christina Radish).  Essentially, Mora “presents scenarios that amplify the DNA of the brand”, building up sets around the intent of the product. Therefore, her sophisticated and thought-provoking contexts do more than simply commercialise domesticity or its individual products in the pursuit of idealism. Each satisfying composition is a way to embrace innovation, celebrating design by inspiring audiences about ways it can enrich their lives.

It was Dieter Rams who said: “Design is not about pandering to luxury buying incentives but producing orientation – and behavioural – systems for a complex and complicated, yet simultaneously fascinating, open world. It is about seriously considering how to make this world a place.” Indeed, Mora’s practice, informed by the best examples of today’s design, offers curated spaces for the imagination, where work spaces, bedrooms, or living rooms are transformed into more than functional rooms – they become icons. 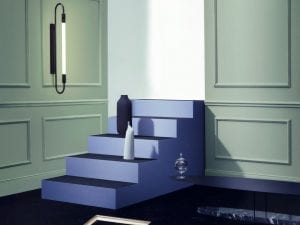 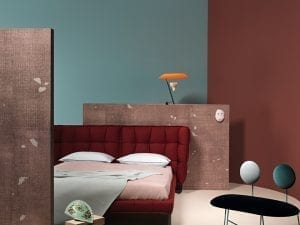 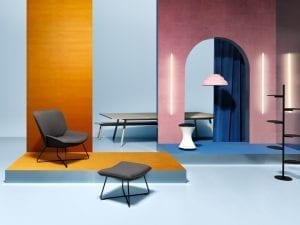 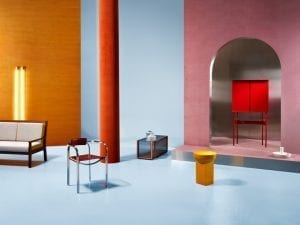 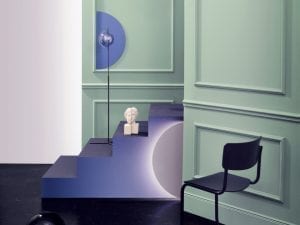 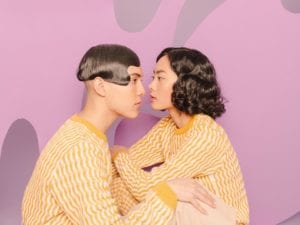 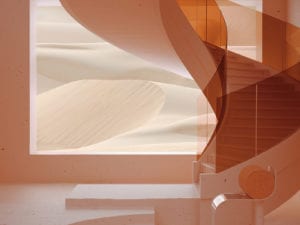