A poetic film by Linn Karen Forland, Come to Heaven of Hearts is a short film depicting the inner world of an old woman – a resident of a nursing home. Full of surprising associations, surreal images and saturated colors, the film sets before us a rapturous scene of an old woman at the end of her life. There are angelic little girls, flowery meadows, pink balloons, troubadour violinists, and shameless baths in popcorn. Old age and childhood meet in the magic circle forming a symbolic unity. However, these idyllic pictures are repeatedly juxtaposed with the reality of life at home for the aged: with empty corridors, perfunctory nursing care and lonely life in seclusion.This production featured in Aesthetica Short Film Festival (ASFF) 2012 as part of the Artists’ Films series. There is still chance to submit a short film for ASFF 2013, which runs 7 – 10 November across the city of York. The final deadline for submissions is 31 May. 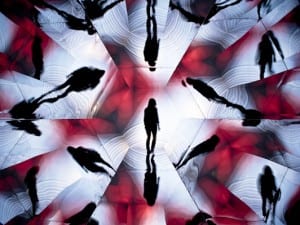 Laura Buckley expertly combines moving image, kinetics, sound, light, sculpture and digital print, to recontextualise the everyday. She uses scanned imagery to create projected videos that are combined with footage from her life.

Fondo Ambiente Italiano (FAI) and the Los Angeles County Museum of Art (LACMA) join forces in AISTHESIS to document the work and the research of two leading figures of Environmental Art.