Boopsedaisy started to focus on photography as a way to release all the creative roadblocks she was finding on her film sets. “Production can be such a long haul and requires a consistent team effort. I had felt after a long stint of writing, producing and editing a few projects in a row, that I needed the creative freedom of flying solo.” The results from the first night’s shoot surprised her. Although she hadn’t heard of camera or light painting previously, the images she shot on film lead her to a new passion exploring colour, structure and movement by using only in-camera effects.

A: You have worked on writing, film and television, photography and production among other things. How would you, therefore, personally define yourself or your work as an artist?
B: I see me as the matriarch of a family of creative practice. Each discipline, be it writing, photography or video editing, has come into my life at exactly the right time and supports the others in a very organic way. I don’t see them existing in isolation from each other in so much as they support and compete with each other, in the way siblings do. The more I learn in one practice, the more it fuels the others. I recently wrote and produced a documentary series about multiculturalism in Australia. There were parts of my research that didn’t fit inside the documentary format that inspired my recent photographic exhibition Culturally Colour Blind.

A: How do you view the connection, if there indeed is one, between your work as a writer and as an artist? Is there a link between words and images for you?
B: I started my career as a screenwriter, which is an incredibly technical and visual way to paint words on a page. After selling some scripts and having no real grasp of the production process that supports them, I pursued training in production. Over years of developing skills across camera operation, interviewing, editing, directing and producing, my skills in selecting vision to enahnce my words lead me to the silent art of photography. There is a freedom in letting a picture just speak for itself that film can never give me and a sense of satisfaction in experiencing the full spectrum of communication via each medium.

A: What or who have been the main inspirations to your work?
B: As all my pictures are of sources of light, I am always looking at ways to capture different colour palettes and movement. Where most of my counterparts utilise urban or natural backgrounds to showcase light effects, I immerse myself in the organic partnership of light and movement. The more I have come to understand the differences between light painters and camera painters (which is what I consider myself to be), I enjoy the work of Darius Twin, Twin Cities Brightest, Julien Breton, The Light Painters and LAPP Pro. It is an exciting area of photography to be part of during a time when the art form is constantly foreshadowing its own death.

A: Why do you choose never to edit or manipulate any of your photographs in post-production?
B: My style of camera painting is the antithesis of traditional photography, as I work in a fluid spontaneous way, moving the camera as the subject is moving – everything they tell you not to do when you first start using your camera. In a congested sea of nouveau photographers and auto pilot digital photography, it is important to me use film as much as possible and stay away from the cheap thrills of post production. In a world where visual trickery is common place, I wanted to capture something magical that only exists between the camera and me. It feels more honest.

A: Your latest works, such as The Onus Perspective seem to be fascinated with colour, lights and lines, looking almost kaleidoscopic. What sort of impression or thoughts do you hope such pieces will conjure in the viewer?
B: I have noticed over the past few years that people have very strong and sometimes adverse reactions to some colour palettes. During my first show, Onus of Perspective, I conducted an experiment in which I asked people to tell me what they saw in such abstract images, with the answers revealing more about colour and its impact on people than I had actually anticipated. Viewers seem to resonate with their chosen colours like it is some kind of medicine for them. I like being their visual pharmacist and thinking that there is a secret colour code that can bring instant relief to each individual.

A: Where did your artist name, Boopsedaisy come from and does it hold any special significance for you?
B: Boopsedaisy represents my approach to the creative process. I break the name into 3 parts:

We can spend so much of our lives pursuing perfect moments that we leave no room for the moment to just be itself. I have learned to honour the “oopsies” in my process and let them take me somewhere new creatively that I was too self-important to consider previously. Humour opens windows to creativity for me and that starts with always laughing loudly at myself.

A: Will you be focusing on film, photography or writing, or a bit of all three next?
B: In terms of photography, I am continuing to expand the range of light box installations I currently exhibit to include a new take on feature walls. I love the idea of larger scale pieces that can be used commercially or domestically. A whole wall of colour and light is such an interesting marriage of abstract art and practicality that I can’t seem to leave alone. In terms of writing and production, this year will see the fruition of a few longer terms projects including multiple series for television, a feature film and the delivery of a book. Wish me luck.

See Boopsedaisy’s artwork in the current issue of Aesthetica out now www.aestheticamagazine.com/shop 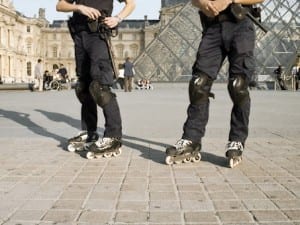 Boopsedaisy started to focus on photography as a way to release all the creative roadblocks she was finding on her film sets. The results from the first night’s shoot surprised her.

Taking inspiration from an assimilation of influences, Lemaitre have reached number one in the iTunes Electronica chart. Aesthetica speaks to the Norwegian duo about their work and future projects.