Charlotte Colbert’s works come to Gazelli Art House, London, this July. With an interest in the surreal and the temporality of contemporary culture, Colbert creates visual narratives using the familiar icons and emojis of instant communication. In the works, she questions whether the digital icons are capable of transcending borders, universalising language to a certain degree, or whether they simply stand as an invasion of personal expression, in which humans cannot truly convey reality through a singular fixed digitisation.

The genesis of the idea for the show started when the child of one of her friends saw a butterfly on a window and tried to zoom into the creature to try and make it bigger. Herself a new mother to a baby girl, she thought about how we technology relates to us on a human level and how it has become as perfunctory as eating and drinking.

To create the haunting images, the artist takes the digital image and places them over the faces of naked female subjects in a derelict setting. In doing so, the people involved are made anonymous – devoid of the human emotion which we would attach to them as real, living beings. Instead, they are dressed with one, simple, icon, while their bodies move without identifiable sentiment.

It is unclear in the images what the emotion might be behind the digital masks, and perhaps as a psychological experiment creates more secrets than it does honesty in expression. In other words, it is easy to transmit a digital icon and cast it off as our own, but does it really show how we feel? Can we be homogenised into monochromatic emotions: happy, sad, scared? Even if we could, no-one is to stop us choosing from a gallery of technological images, and falsify ourselves in order to save from our true anxieties, and mental states.

Nude figures unable to connect, couples frozen in a forced state of feeling, a surreal army of circuit board women, an emoji wasteland where madness, fantasy, comedy and chaos coexist. 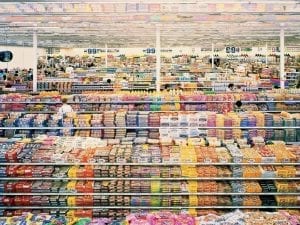 Future Shock examines our decisive moment in history and looks to the challenges and possibilities of the future through the work of 10 artists. 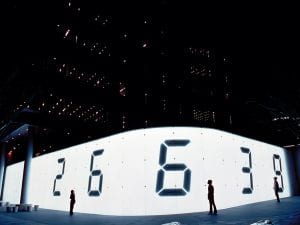 Kalliopi Lemos’ work has been dedicated to raising questions about the processes and politics that cause forced migration and the impact that ‘neo-capitalism and the irresponsibility of political powers’ have on its victims, particularly women.