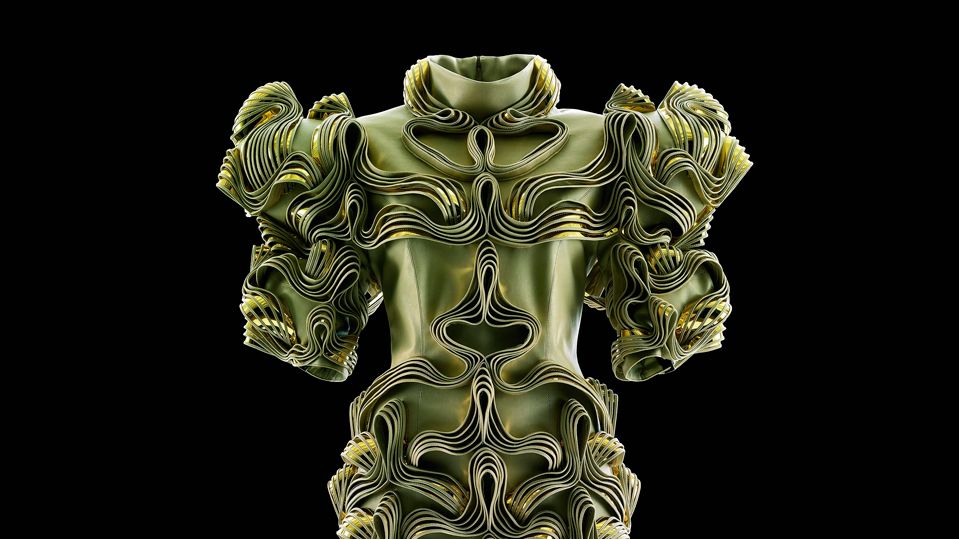 Having graduated just nine years ago, Dutch designer Iris van Herpen has already achieved the seemingly impossible when it comes to 3D printing.

In the past two years, London alone has seen fashion blockbusters overtake art and design exhibitions in scale and popularity with Isabella Blow: Fashion Galore! and Alexander McQueen: Savage Beauty which saw such high demand that the Victoria and Albert allowed public entry overnight for the first time since its opening over 150 years ago. The art, design and fashion fields are merging more than ever as we see and share imagery online, with practitioners from all areas now able to freely access and influence one another.

Our free-flowing visual culture and its enabling technology is present within the work of pioneering Dutch designer Iris van Herpen, who is without a doubt, leading the way in innovative Dutch and European fashion design. Van Herpen’s sculptural pieces are often the result of collaborations with choreographers, architects, artists and dance companies, and they have included innovations such as fashion’s first 3D printed dress. In 2012, the Dutch Groningen Museum recognised van Herpen’s enterprising practice and presented a selection of her early collections; the follow-up to this is Transforming Fashion, which displays out ts from 15 collections across the High Museum of Art in Atlanta, Georgia, and at Groningen. The young designer achieved all of this within eight years of her graduation.

Whilst Groningen is committed to presenting early work from fashion’s hotly-tipped, the High Museum of Art has exclusively collected classic and contemporary art and architecture – until now. Van Herpen’s 2015 Ice Dress, from her Magnetic Motion collection, is to be the High’s first fashion acquisition: knowingly incorporating the worlds of architecture, science and technology. Sarah Schleuning, curator of decorative arts and design at the High, explained that the choice was made as “it is a masterpiece that embodies some of the great hallmarks of Iris’s work: vision, creativity, nature and technology, and her spirit of collaboration.”

Van Herpen views technology as a necessary “tool” rather than an inspiration, working in what she calls the “free space” of high couture to create pieces that Schleuning feels “define the field of fashion as art.” The majority of her forays into new materials and processes have been the result of a desire to represent an organic element, whereas ironically her more futuristic shapes are often most easily made traditionally by hand, hence the transition to new media has been more an artistic necessity. Many of her collaborations, for example, have been with individuals that she has never met as, she explains: “They are on the other side of the planet, yet it’s still possible to work together – it’s an exciting thing that today, somehow, the whole world can be in the studio if it has to be.”

It is in her collaborative process and intense focus upon the natural world that the influence of one of van Herpen’s previous employers, the late Alexander McQueen, can be seen. McQueen has been cited as having said: “I have always loved the mechanics of nature and to a greater or lesser extent my work is always informed by that,” and although he was better known for mirroring the natural world through traditional methods, new media made fleeting appearances.

However, unlike van Herpen, this has usually been to the effect of showmanship rather than garment technology; for example, in 2006, around the time of van Herpen’s internship, during which she developed a ground-breaking hologram piece with video maker Baillie Walsh to transport an ethereal, floating Kate Moss to the catwalk. Moss’s organza-wrapped arms, swimming through space before the catwalk began, demonstrated McQueen’s own preoccupation with the inimitable forces of nature, also at the fore of van Herpen’s designs. An early example of this is her Water Dress, the fashion industry’s first 3D printed dress, which, she states, takes its inspiration from the “uncontrollable force” of water.

Water Dress finally came to be after tests with “30 to 40 different materials” until a polymer resin was discovered that could curve, fall and pool like a wave – resulting in a solid sculpture, which admittedly wears the model rather than vice versa. Although this piece succeeded as an advance in garment design, it did not fulfil van Herpen’s brief as she notes that “at the time it was impossible because you couldn’t 3D-print transparently.” The process was made possible by the time van Herpen came to produce the Ice Dress in 2015 from thin ribbons of transparent resin, which the designer describes as “such a thrilling moment, because it was in my head all those years and finally came out.”

In fact, as she explains, it was an equally thrilling moment for the 3D printing firm employed as well, whose response to van Herpen’s “I want it transparent” was “well… we can’t do it; 99.99 per cent, it’s going to fail. The printer won’t be able to do it.” Two weeks after this conversation the printing had worked, and yet the technicians remain unsure exactly how, or whether they will ever be able to replicate what should have been an impossible process; as van Herpen herself notes: “I think we had some luck from somewhere.”

The “we” that van Herpen refers to includes British architect Daniel Widrig, famed for his work with Zaha Hadid, and 3D print creations ranging from stools built from Japanese rice wine, sugar and plaster, or wearable sculptures formed from 3D scans of the body. The two finished Water Dress as part of the Crystallization collection, which also features wisps of clear resin that float around the model like a splash of water suspended in space, scarves of clear droplets that the two meted and moulded using a hot air gun and a great deal of patience. This was the rst of many inspiring collaborations, each of which van Herpen describes as a “dance” – an area in which she is trained, as evidenced by her stamina, dedication and fascination with the body. Where McQueen had Isabella Blow, van Herpen highlights no single individual but states that “the body itself is my muse: it is movement of the body in general. Often when I have a piece in my mind, I already imagine its movement and its relationship with light, and that can trigger me to start working – because I like its movement.”

This appreciation has led to van Herpen’s role as costume designer for Madame Butterfly, and her understanding for physical sensation is communicated by Capriole (July 2011), a ve-piece collection which intends to visually reflect the feeling of a parachute jump stage by stage: from the dense feeling of aeroplane take-off to a light and euphoric touch-down. Whilst Capriole is formed from a sturdy plastic, collections such as Wilderness Embodied have used materials that allow the garments to be worn and washed in the more traditional sense (although less so for some pieces, such as Moon Dress whose liquid iron resin surface resembles a crater-covered moon). Although van Herpen’s collections should be viewed as couture design rather than compared to practical wear, 3D printing as a process is set to have a substantial effect on the wider fashion world. As 3D printers become more affordable in the future, ordering clothes online may result not in waiting for a delivery, but instead pressing “print”; alterations and modifications could be made to the wearer’s needs and preferences, and brands could become increasingly globally available. Further possibilities for the industry will arrive with 4D printing, which constructs materials and objects that can change over time – for example an alteration in temperature or light triggering a state, colour, or shape change. While this could be a significant step for clothing in areas such as the emergency services, in terms of the worlds of art and couture, van Herpen acknowledges that this will allow her static forms to take on a life of their own: “I can design a dress that changes over time – I can design her movement, her metamorphosis.”

Despite her use of cutting-edge technology to manipulate and create new materials, van Herpen is keen to draw attention to her handmade collections and the hand-stitching that turns many of her 3D printed pieces into wearable art. In some cases, even the transformation of materials itself is entirely hand-produced, for example Chemical Crows: a 2008 collection that grew from an experiment with a child’s broken umbrella and revolved around the crows that nest around van Herpen’s Amsterdam studio, as well as memories of the jackdaws that she kept when she was growing up in rural Holland. The associations of these birds with black magic and their appreciation for anything that shines led van Herpen to turn to notions of alchemy, and turning base metals into gold. The resulting collection sees gold umbrella ribs fan out from the waist like wings and thousands of metres of yarn transmuted into layered textures that flap and flutter like wings. With pieces such as this, the clothing comes to life when it is walked down the catwalk or even used for van Herpen’s many choreographed collaborations.

It may be that the traditional exhibition space is not the ideal location for the works; however, van Herpen asserts that “at the same time, detail is missed. For example, at a show, when girls walk by, it’s a beautiful moment, it all comes to life, but you miss all the details. When you have the clothes on a mannequin, and you look at them, you can see how the pieces are made. You can see details in construction and in materials.” The tactility of the garments is also extremely significant, given van Herpen’s extraordinary use of materials, usually “outside of fashion” and the fact that many of these fabrics have not been used in such a way before. Accordingly, at Groningen and the High, there will be a dedicated area for touching and exploring the materiality of the pieces.

Also on view will be pieces such as Spatial Reverse: a short film featuring Particle Dress in a twisting, contorting dance choreographed by Russell Maliphant with Ford Vignale, in collaboration with Sadler’s Wells, and footage of the designer’s most recent multimedia runway shows. Van Herpen works with Dutch sound artist Salvador Breed to create her brooding catwalk soundscapes. “We literally make sounds for dresses. We have done that so intensely that when I work on a dress now, often I already imagine a sound fitted.”

Given such a multifaceted practice, which stands in many ways between the worlds of art and fashion, as the High Museum’s Sarah Schleuning concludes: “The story of whom van Herpen infiuences is for a future exhibition.” Whether her lasting impact will be on fashion designers, architects, dancers, artists or choreographers is yet undecided.

Iris van Herpen Transforming Fashion. The High Museum of Art, Atlanta. Until 15 May. 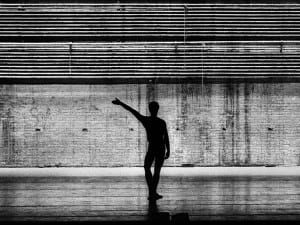 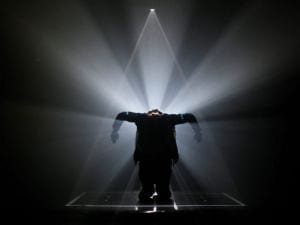