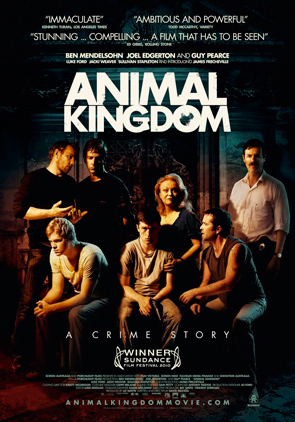 Writer and Director, David Michôd, is a riveting new voice in the world of contemporary Australian cinema. His debut, Animal Kingdom, was the winner of the World Cinema Prize at the Sundance Film Festival, not to mention that Jackie Weaver (the grandmother) went on to receive an Academy Award nomination for Best Supporting Actress.

Animal Kingdom tells the story of 17-year-old J (James Frenchville) whose mother has just died of a heroin overdose. Alone and unsure of what to do, he reaches out to his estranged and vicious criminal family for help. His grandmother (Jackie Weaver) takes him in; however, his uncle Pope Cody, an armed robber, is on the run from a squad of renegade detectives. Poor J is caught in the cross-fire, as his family is turned upside down through Pope Cody’s demise, putting J in a vulnerable position where he needs to turn to the police for help and ultimately betrays his family.

An intense and profound drama, Animal Kingdom exudes fear and desperation. Intense and thrilling, this film must be viewed.