This summer The Hepworth Wakefield presents the first reinvention of Allan Kaprow’s Yard to be realised in the UK. First installed outside the Martha Jackson Gallery back in 1961, Kaprow’s seminal “Environment”, or “Happening” will be hosted by The Calder, The Hepworth’s latest contemporary art space. Set across 600 square metres on the ground floor of a former 19th century textiles mill in the gallery garden, the project will comprise of thousands of tyres, which visitors are encouraged to play with, rearrange and rediscover.

The term “Happenings” was popularised in the 1960s as a way to explore participant-led artworks and site-specific installations. Kaprow’s own rejection of formal aesthetics and his embrace of new ways of working paved the way for other influential performance artists including Marina Abramović and Claes Oldenburg. He challenged the definitions of what a work of art could be and developed a new way of working that encouraged spontaneous interaction and focused on the performative process of making art rather than the creation of an object.

The reinvention of Yard does not try to replicate the original but rather transforms the original idea for the work. Unlike his other “Happenings” Kaprow didn’t produce a text alongside Yard for its reinterpretation and it is based on images of previous iterations as well as hand-written notes by the artist. Other artists will interact with the installation and create live performances around their involvement with the piece.

Those involved include emerging dance artists Nicola Conibere, Robbie Synge and Janine Harrington, who have been recently selected for the Esmée Fairbairn funded mentorship scheme at Siobhan Davies Dance. They will occupy the space across three separate days and explore the relationships between the objects and the environment. The exhibition will culminate in a performance by music collaborators David Toop and Rie Nakajima, who will convene a group of musicians to continue their ongoing exploration of the idea of event as sculpture.

Yard is presented alongside The Hepworth Wakefield’s major summer exhibition Franz West: Where Is My Eight? which is on display from 13 June until 12 September. West acknowledged the influence of Kaprow on the development of his own work and how art and objects might be used as a catalyst for social interaction. 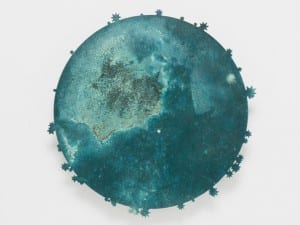