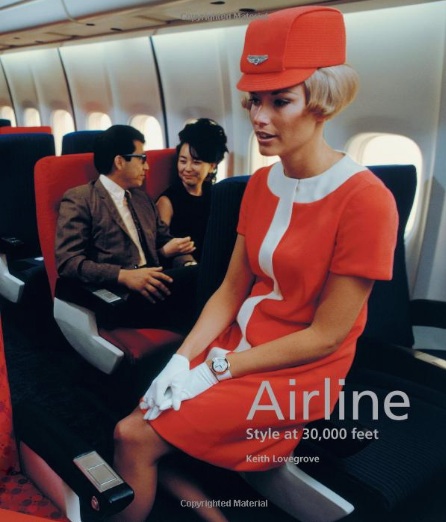 Aviation is very much a part of daily life. People don’t think twice about flying to Rome or New York for the weekend, and as such an integral part of 20th and 21st century life, airlines have their own culture, including design, branding, fashion and food. Think about Virgin Atlantic’s 25th anniversary advertising campaign – it was focused on the brand, fashion and beauty of the air hostesses and the suaveness of the pilots.

Airline Style at 30,000 Feet is a compendium that highlights the different eras in aviation, the accompanying change in styles and the overarching views of society. From the functional wardrobe and advisory notices of “putting cotton wool in ears” to reduce noise in the 1930s to the hot pants and leather boots of air hostesses in the 1970s, the airline industry’s trends have been on a par with the changing face of society and technology.

The text is divided into four main sections, which trace the history and development of the flying experience for both customers and employees. It’s a fascinating book and a great read for exploring an area rich in cultural history and observation.