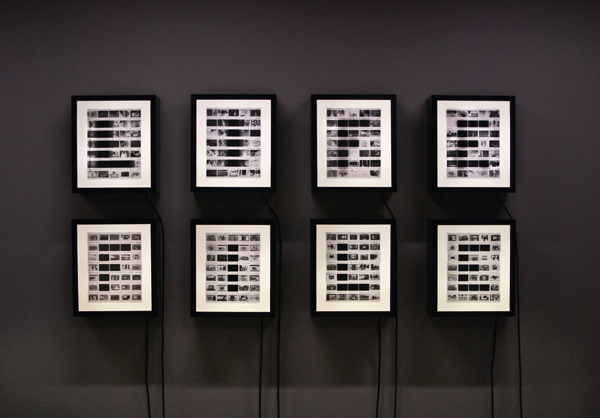 The Aesthetica Art Prize Exhibition opens this week on 3 April at York St Mary’s, York. Celebrating innovative and outstanding artworks, the display features shortlisted pieces from artists in the following categories: Photographic and Digital Art; Three Dimensional Design and Sculpture; Painting and Drawing, and Video, Installation and Performance. The presentation highlights artistic talent from locations including Germany, New Zealand, Italy, Chile and the UK. We take a closer look at the eight selected individuals.

Amedeo Abello & Federico Morando
The LIFE/FILE project is a reflection on the relationship between concrete and virtual reality, which aims to break down the perceived opposition between the two. LIFE refers to the everyday life we lead offline, while FILE is the virtual, online life: the trail of data which we create. The connection between each entity is underlined by the fact that they are anagrams of each other, illustrating that “digital” and “real” are not in fat oppositional concepts, but are two distinct elements in our daily experience of life. The time in which we live is essentially urban, necessarily digital and nostalgically analogue. Our latest works, which stem from a background in graphic design, aim to collect the contradictions that underlie this post-modern era, through visual and photographic experimentation. We are drawn to the idea of being between different practices – design and photography – without favouring either of them.

Deb Covell
I am mostly concerned with bringing a form into being by exploring the material and sculptural potential of acrylic paint. By omitting the pictorial and eschewing the traditional canvas foundation, I engage the viewer with the purely formal and sensual aspects of my work. I start by painting layers of acrylic paint onto stretched plastic sheets which are then peeled off to create a support. Illusional spacial depth is brought in by the use of black and white diagonal bands painted randomly onto these props. Eventually the diagonal gives way to the upright and the parallel and accrued layers of paint break out from the flat vertical support into real space. A process of folding, creasing, cutting and collapsing follows until a sculptural form emerges. Key references include early 20th century abstraction, particularly the reductive, geometric language of Russian Suprematism.

Elke Finkenauer
This work is a reflection upon the multiple facets of human nature. No one who achieves huge success does so alone. Whereas a monument commemorates only heroic qualities, the piece can be considered an anti-monument which instead celebrates the mundane reality of the “everyperson”. It reveals softness, fluidity, brightness and darkness, all compressed into one whole. My creation examines different possible approaches to drawing, through engagement with surface, line, gesture and process. In Draw a Line Somewhere, however, I have combined the techniques of drawing with those of soft sculpture, to produce a “soft-drawing.” While the materiality of the piece hints at 3D, it still exhibits characteristics of drawing, with a flat surface as a ground and line created through processes of cutting and stitching. Whilst the form appears organic, it is the product of meticulous labour.

Harriet Lewars
The work I present here is part of an on-going project at the interface between art and music. Drawing on examples of interdisciplinary artwork from the latter half of the 21st century, my developing sculptural practice is about exploring the possibilities of cross-disciplinary art objects. “Frustums” are truncated cones, built in sheet steel and mounted above horizontal planes. The metal acts as a soundboard from which many strings (more than 200 in the largest example) are stretched. The frequencies of the pitched tones produced are inversely proportional to the string lengths defined by the geometry of the structure. Acknowledging the visual appeal of musical instruments, the work adopts a formal language that refers to constructivist and abstract geometric sculptural practice. As instruments, they offer a wide range of potential performance approaches, both musical and theatrical.

Inés Molina Navea
In my digital portraits, I superimpose details taken from photographs of up to five different faces in order to create images of people who have never existed. As well as being a deconstruction of Henri Cartier-Bresson’s idea of “the decisive moment” in photography, I want to use these images to reveal modern practices of social control. To be fully considered as a human subject is a privilege that is granted to some, while others are marginalised. The hooded person in 541 días, then, is a universal image of those who are outsiders in a world, which presents itself as democratic and as a place where all are respected, but that is built on an economic system of exploitation. It is a reminder of social inequality and those who are marginalised or criminalised by this system, which we are all part of, ultimately reminding us that many are stripped of their full humanity by social and economic forces.

Ingrid Hu
I practice scenography on an urban scale. Drawing on my background in theatre and large-scale multidisciplinary design, I approach each project through research and critical thinking, with the aim of creating idiosyncratic installations relevant to their spatial and social context. The submitted entry, Longplayer bowl display, is a permanent structure that functions as a display and storage of 234 singing bowls which were used in Longplayer Live, the live version of the 1000-year-long composition Longplayer, originally commissioned by Artangel. The original installation is housed in the Lighthouse in Trinity Buoy Wharf, London. Each tier of the structure, containing 39 bowls positioned sequentially, corresponds to one of the six rings of the Longplayer Live instrument. The curved form evokes the movement of the Longplayer Live instrument and the cycle of the music itself.

Julia Weißenberg
The starting point for the video travelogue There is no real way of knowing was an article in an Icelandic newspaper, which reported on the discovery of a 5,300 year-old tree. Trees store information of natural history, such as the climatic conditions during their lifetime; indeed, scientists can date archaeological excavations by using historical wood. Trees are a part of our historiography. I was interested in this tree in Iceland, which was through to be around 500 years older than the oldest tree known about at the time. So I started to search for it. Eventually my quest turned into a research project, which meanders between fact and fiction, knowledge and myth. I am interested in the methods of current scientific findings. I work mainly with video and my practice revolves around topics such as memory and perception. My way of working may therefore be described as “artistic research”.

Sybille Neumeyer
The work Song for the Last Queen refers to the endangerment of bees, a species with a vital role in maintaining our ecosystem. Working with beekeepers in the USA, Japan and Germany, I researched the current problem of dying bee colonies. I collected honeycomb, wax and dead bees from a collapsed beehive – examining each, both as evidence and as a significant and extraordinary material. Creating a muted preparation of a perished bee colony in honey, I ask questions about scientific practices, future perspectives and our responsibility to our environment. I am a travelling artist and designer, whose work investigates the relation between humans and nature as I address phenomena found in science, culture and the natural world. During my travels, I aim to understand global structures as well local peculiarities. Small details attract me and become a starting point for experiments and observations. 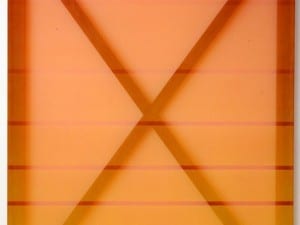 All That Matters Is What’s Left Behind, Ronchini Gallery

All That Matters Is What’s Left Behind at Ronchini Gallery brings together abstract works from a distinct group of young international artists, each of whom explore the act of “leaving their mark.” 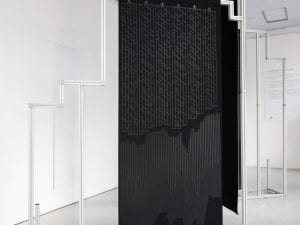 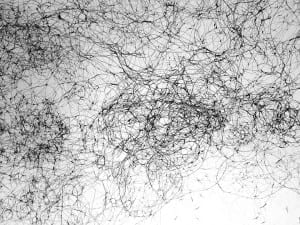 There are only 11 days to go until the Aesthetica Art Prize closes for entries on 31 August. Today, we shine a spotlight on longlisted artist Joomi Chung’s innovative installation entitled Swarm.