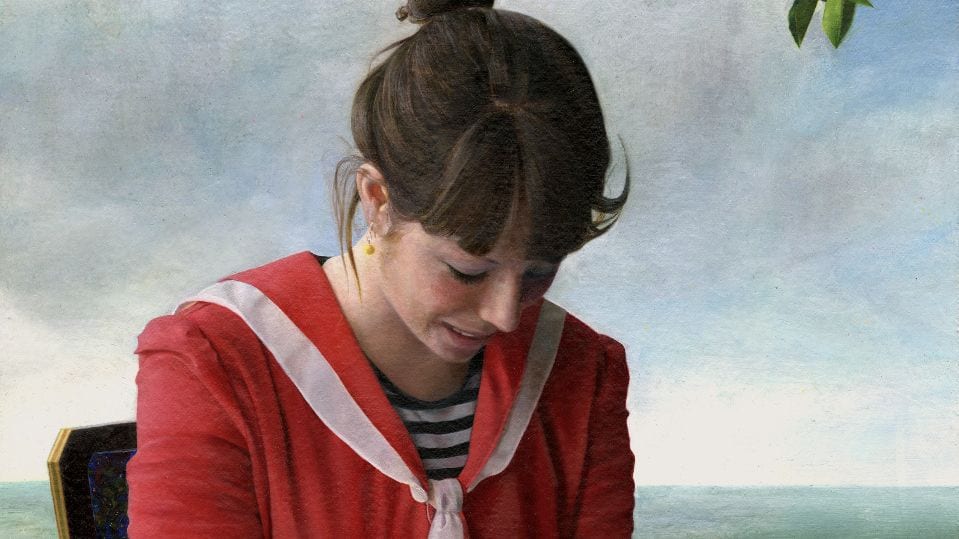 Gareth Cadwallader’s body of work has always sought to portray an idealised representation of the world. His most recent and ongoing series of paintings attempt to convey, as he puts it, a sense of “wellbeing and contentment”, matched only by “the psychological state of absorption.” The visual language he has created is dominated by Italianate hills, tranquil seascapes, citrus trees and café verandas, with an underlining geometric composition that constantly seeks to establish order and clarity.

Sailor Girl II initially took inspiration from a picture on the side of a box of salad. Where others simply saw the image of a smartly-dressed man transfixed by a cherry tomato, Cadwallader saw an allegorical insight into the man’s mental state. He has described the image as a “visual metaphor for the freshness and well-being promised by the salad”, which led him to explore similar metaphors in his own art.

Whether he is painting landscapes or portraits, Cadwallader’s work transports us into its own self-absorption, an effort aided by the fact that it is ultimately anchored in everyday experiences. Perhaps that is why it seems to make sense that this painting, now longlisted for the Aesthetica Art Prize 2016, had its humble beginnings on the side of a salad box.

Gareth Cadwallader’s work has always sought to portray an idealised representation of the world. Sailor Girl II has been longlisted in theAesthetica Art Prize and will feature in the exhibition.