February is LGBTQ+ History Month in the UK. Aesthetica rounds up 10 must-see online shows, publications and videos – featuring powerful and inspiring artwork from across the globe.

“In recent years, a young and active queer photography scene has emerged, helped in large part by social media,” says publishing house Verlag Kettler, whose new photobook compiles work by 40 contemporary lens-based artists. “Art, more than anything, opens up the possibility of approaching one’s own sexuality beyond the limits imposed by taboos.” The book introduces up-and-coming talent alongside established names, exploring notions of gender, self-presentation and affirmation. Bold and dynamic visuals meet poignant, urgent documentary imagery – reflecting on the experiences of creatives and their communities.

Discover the first major exhibition to examine the impact of the LGBTQ+ liberation movement on visual culture. 50 years ago, in June 1969, the Stonewall Uprising marked a turning point in civil rights – calling for queer visibility and self-expression. This show encompasses the two crucial decades after the riots, exploring the many ways artists across the US responded. “The subsequent decades saw the proliferation of gay, lesbian, and trans rights struggles across the United States, accompanied by joyous, transgressive cultural and artistic experimentation,” explains Columbus Museum of Art, hosting the show digitally.

This publication opens with a gay liberation slogan from the 1970s: “I am your worst fear. I am your best fantasy.” Throughout its pages, it explores how creatives have approached sexual orientation and gender identity across 130 years. Starting in 1885, it offers a new perspective on art history. Renowned names including Nan Goldin, Wolfgang Tillmans Catherine Opie and Francis Bacon are positioned alongside lesser-known artists, with many from the last decade. Featured above is the late Chinese photographer Ren Hang (1987-2017), whose images of intimacy are testament to art in the face of censorship.

From Here to Eternity | Online Exhibition

Sunil Gupta (b. 1953) uses photography as a critical practice – focusing on family, race, migration and the political realities concerning the fight for international gay rights. Gupta has been inspirational to generations of activists and campaigners, from participating in New York’s active Gay Liberation Movement in the 1970s to his more recent campaigning for gay liberation in India. These projects, presented by The Photographers’ Gallery, have been instrumental in raising awareness of taboo culture – offering a new understanding of the ways in which homosexual life is presented, seen and perceived today.

Leonard Fink (1930–1992) was an amateur photographer who documented over 25 years of gay life in New York – including parades, bars and the west side piers. He taught himself photography using an old 35mm camera and a homemade darkroom in his small apartment on West 92nd street. In this online show from Google Arts and Culture, The Lesbian, Gay, Bisexual & Transgender Community Center selects from an archive comprising thousands of images. Fink worked in complete obscurity; these photographs were never published during his lifetime. Candid black and white images capture stories from 1954 -1992.

Leslie-Lohman Museum of Art presents the first retrospective of late photographer Laura Aguilar (b. 1959-2018), who is best known for her nude self-portraits in nature. Bringing together more than 70 works produced over three decades, Show and Tell offers candid portrayals of Aguilar; her friends and family; LGBTQ+ and Latinx communities. The photographs and videos are at once personal and political, acting as “a rebellion against the colonisation of Latinx identities – racial, gendered, cultural and sexual.” The New York-based gallery is the only dedicated LGBTQ+ art museum in the world. 6 February – 9 May.

Naima Green is a Brooklyn-based artist and photographer approaching the theme of identity through an incredibly multidisciplinary practice – going beyond photography to comprise video and furniture. At the centre of the Fotografiska’s exhibition is the Pursuit series, which features photographs of queer womxn, trans, non-binary and gender-nonconforming individuals – which she also repurposed as a deck of 54 playing cards inspired by Catherine Opie’s Dyke Deck (1995). Green photographed over 100 sitters in nine days, resulting in stunning portraits through which tradition is transformed and reimagined.

In 2007, the Nakamura Keith Haring Collection opened its doors amongst the lush landscape of the Yatsugatake Mountains. It’s now available to explore digitally. Google Arts and Culture presents a range of informative slideshows, including the introductory Who Is Keith Haring? The late artist is one of the most recognisable figures of the 1980s art scene, becoming known for using his work to promote LGBTQ+ visibility and HIV/AIDS awareness. Log on to be inspired by bright, energetic murals filled with colour.

From a Place of Love | Zanele Muholi | Video

Zanele Muholi (b. 1972) is a self-described visual activist exploring themes of labour, racism, Eurocentrism and sexual politics. Muholi’s career began in the early 2000s with images that told the stories of black lesbian, gay, bisexual, trans, queer and intersex lives in South Africa. During the 1990s, the country underwent major social and political changes. The 1996 post-apartheid constitution was the first in the world to outlaw discrimination based on sexual orientation. However, the region’s LGBTQIA+ communities remain under threat. “In the face of all the challenges our community encounters daily, I embarked on a journey of visual activism to ensure that there is black queer visibility,” the artist explains. This video chronicles members of the QTIPOC community responding to Muholi’s work.

Whilst the Tate’s galleries are closed, log on to explore works from the collection. This digital resource presents key artists from their archives, as well as quotes on the queer experience from the likes of photographer Robert Mapplethorpe (“If I have to change my lifestyle, I don’t want to live.”) and visual activist Zanele Muholi (“If I wait for someone else to validate my existence, it will mean that I’m shortchanging myself.”) There are videos to watch and features to read, plus virtual exhibitions. Themes include Love and Relationships, Gender and Bodies, Queer Art History and Progress. 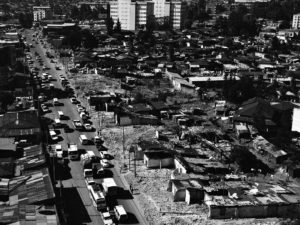 Impressions Gallery presents work by a generation of visual artists and filmmakers addressing what it means to live in Africa today. 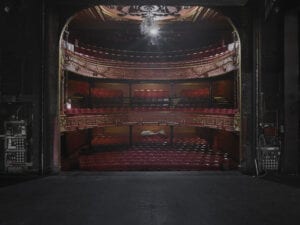 Many arts institutions across the UK have been threatened due to the pandemic. Joanna Vestey has photographed London’s empty theatres.