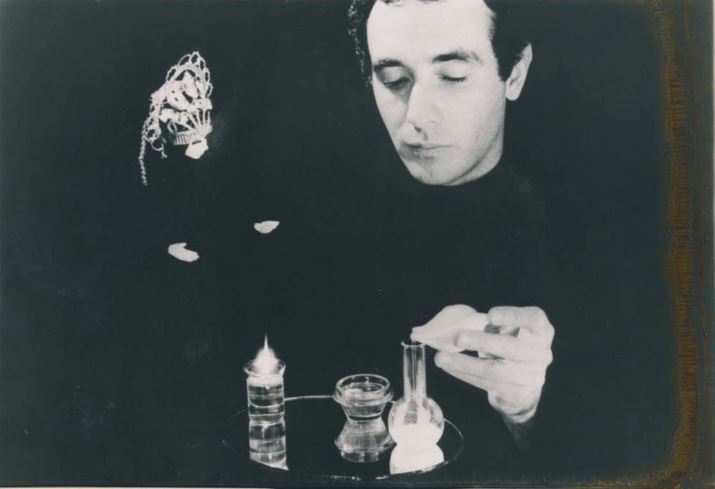 Robert Anton was a cult figure of the avant-garde theatre scene in 1970s New York, crafting spellbinding performances that tapped into the contemporary landscape. Curator Anke Kempkes discusses a new show at the Edge and Andrew Brownsword Gallery, Bath, exploring the mesmerising and enduring quality of Anton’s work.

A: Robert Anton was a cult figure of the avant-garde theatre scene during the 1970s. What made Anton’s work so fascinating to audiences both in the US and Europe?
AK: Witnesses of Anton’s play unanimously testified to the intense, magical character of the performance and the originality of his surreal, allegorical imagery. Some people reported that they hardly dared to breathe during the performance and that it was like being part of some secret society’s ritual or initiation. In the wake of his deep interest in alchemy, Anton’s performance could have a transforming and a times cathartic impact on the viewer. He was very drawn to a European artistic sensibility – hence him applying the European way of spelling ‘theatre’ to his work. This was heavily influenced by Antonin Artaud’s theory of the Theatre of Cruelty, as well as by visual artists, from Hieronymus Bosch to post-WWI painters George Grosz and Otto Dix. And yet, his work was equally influenced by American popular culture – from 1930s Hollywood movies and Disney cartoons, to Broadway productions like Harald Prince’s first staging of Cabaret (1966) with the legendary stage design by Boris Aronson. The Anton Theatre was silent, with the exception of the occasional tune that would be played for a scene.

A: Can you describe the distinctive appearance of Anton’s miniature figures and props – and the unique experience of viewing one of his plays?
AK: Anton’s figures – his ”actors” – were just about a thumb’s size. They were marvelously sculpted heads which he animated in front of the viewers eyes with an exceptionally subtle craft into a seamless performance of ever-changing identities and appearances – from a human allegorical or pedestrian character to beast and back. People described him as a true magician. Anton also had the god-like authority over the fate of his characters, and his rule could be emphatic or cruel. The audience was limited to 18 people per performance. The viewers would sit very close to the tiny proscenium covered in black velvet against a dark backdrop.

A: How did Anton’s work respond to New York?
AK: The plays were a word-by-mouth affair. Anton had an illustrious following in New York and in Europe of intellectuals and artists, including Susan Sontag, Diane Vreeland, Linda Hunt, Robert Altman, Yoko Ono and John Lennon, Peter Brook, Benjamin Taylor, Tommy Tune, Harald Prince, David Rieff, Peter Goldfarb, Federico Fellini and more. His work appeared at the East Village experimental La MaMa theater, Robert Wilson’s Byrd Hoffman School and at the studio of Stella Adler – one of his most ardent admirers.

Anton’s work reflected on the social landscape of New York City. His figurines would embody personalities he observed in a park at the Upper West side where actors, dancers and opera singers would meet. Anton dramatised these people into fantastical characters: uncanny witches, vampires, clowns, tragic-comic creatures and protagonists.

A: What themes did his characters and stories explore?
AK: Anton’s theatre was not scripted. It was composed of a string of surreal episodes that he modulated throughout the 1970s, allowing an aspect of improvisation. The themes of the play were surreal parables of desire, aspiration, redemption, mischief, downfall, violence, death, rebirth and most of all transformation and ultimately transcendence. Fantastical creatures and pagan objects populate Anton’s play, part animal, part human, part monster – scary, tender, pathetic, empathy evoking.

A: How does his work continue to resonate today?
AK: The hybridity of his characters and aspects of camp aesthetic in Anton’s theatre are most resonating with contemporary art practice. When we showed the exhibit in Warsaw last year there was a strong response from young queer performance artists exploring his work. For example, we showed the performance film The Accursed Ones by Mikołaj Sobczak and Nicholas Grafia at the Glasgow Tramway station in Spring this year. The piece had premiered at the Museum of Modern Art in Warsaw at the same time as the opening of the Anton Theatre. The duo’s The Accursed Ones equally features allegorical characters from popular culture: a vampire, a zombie and a witch re-coded through a queer perspective. The piece is critically engaged with the nationalist re-writing of history by the current right-wing conservative Polish government targeting particularly LGBT+ communities and activism with propagandistic populism.

A: What can viewers expect to see in the exhibition?
AK: The exhibition shows over 40 of Anton’s original figurines, alongside elaborate props, his drawings and sketches and archival exhibits such as correspondences, program leaflets, photographs, and the vast number of articles written about The Anton Theatre in the US, France, Germany, Italy and Poland from the mid 1970s to his untimely passing in 1984 and beyond.

A: What do you hope audiences take away from the show?
AK: Every viewer seems to develop a unique and intimate relationship to the exhibit. Since its new public presentation in 2017, we have numerous testimonies that the visitors find the exhibit a very moving and uncanny experience. There is definitely something magic emanating from the show. I hope for the audience to appreciate this dense and rich exhibit as the outstanding creation of an extraordinary artist whose oeuvre sadly spanned only little more than a decade. Anton has left a unique yet discreet legacy.

The Theatre of Robert Anton runs until 14 September. Find out more here. 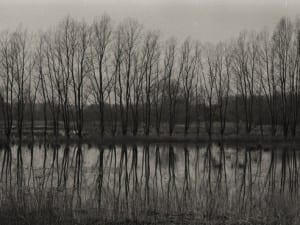 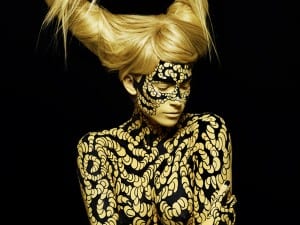 Rankin, Johny Dar and model Tuuli Shipster, have teamed up to produce the stunning calendar. Inspired by the artist’s series, DAR the BOOK, Dar hand-painted his designs directly onto Tuuli’s body.