For his first London exhibition since his celebrated Moonmilk series, Ryan McGinley has assembled seven new photographs, all in the largest format the American artist has yet worked in. Scale is one of the central variables in McGinley’s practice, as each photograph taken is initially printed in an array of sizes in order to fix the exact dimensions that allow the image to speak most effectively to the viewer. All prints in other sizes are then discarded. McGinley rarely produces his artworks at this 280 x 180 cm format, the maximum size, and only does so when the photograph truly calls for a vast canvas – an expanse that demands a heightened scrutiny from the viewer, as it does more attention on the part of the artist.

Ryan McGinley’s aesthetic has evolved over the past decade from a verité snapshot style to one that is more cinematic, even epic. More director than documentarist, McGinley has recently made photographs in which his imagination has become imprinted on the reality he captures. His working method involves a careful balance of the orchestrated and the unpredictable, the staged and the spontaneous. Although the images begin with choreographed scenarios, the images that result are never wholly pre-meditated. Indeed, it is this very sense of the potential for randomness that is alluded by the exhibition’s title, which refers to a kind of fluttering butterfly. McGinley determines the activities and locations of his shoots in advance, preparing elaborate studio-style lighting – despite these contingencies, McGinley’s models are encouraged to behave on their own initiative, taking actions as utterly unpredictable as a fall from a cliff or a tumble down a cascade. When photographing his models jumping in a haystack, sliding down a rushing river or holding a wild animal, he cannot know what image will result. The subject matter of his recent work occupies a profound middle ground between reality and the artificial: McGinley’s images are dreamed worlds willed into existence.

The taking of the photograph is only the beginning of McGinley’s artistic process, as his chromatic interventions and manipulations of scale are central to the emotional and spiritual landscapes evoked by each image. He applies effects to the entire image, rather than to individual sections, printing each image in an enormous variety of colour variations and grain amplifications before deciding on its final appearance. In Purple Beacon, for instance, the artist chose a filter that radically changed the colour of the sky and water, but left the tone of the girls’ bodies unchanged. The grain amplifications endow the images with a familiarity and immediacy, relating them to the kinds of casual photography found in family photo albums. McGinley’s adherence to apparent realism is not an attempt to trick the viewer; rather, it serves only to make the images that much more evocative and accessible.

McGinley’s orchestrated spontaneity also plays heavily into his studio work. In one sense, the physically confining studio offers more freedom than the great outdoors: the element of illegality, a significant concern when shooting nudes in public spaces, is removed. McGinley never demands a pose; he prefers to offer only light direction, allowing for the models position themselves naturally. When making the photograph Jessica, he did not ask the girl to pair a sweet smile with a profane gesture; it was simply what he got, and captured.

McGinley’s current practice, which alternates between lengthy cross-country journeys and studio shoots, repeatedly breaks down the barrier between private and public spaces – between nature’s space and culture’s; between what is personal and what is constructed. Whereas he once photographed his close friends, his elaborate casting process now involves photographing hundreds of people he meets – on the streets, at concerts, through the internet – before selecting a small group with which to travel, and on whom to turn his camera. Although McGinley is no longer so personally involved with his subjects, however, his technique still constructs a powerful sense of intimacy and pathos – particularly when rendered at a scale which commands such physical and emotional presence. 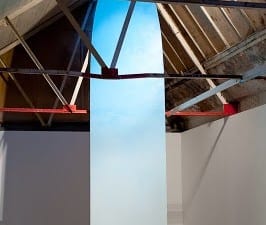 For his first London exhibition since his celebrated Moonmilk series, Ryan McGinley has assembled seven new photographs, all in the largest format the American artist has yet worked in. 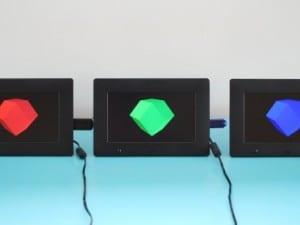 In celebration of their first anniversary, Hoxton Art Gallery are showing The Pleasure Principle. We speak to Director Matthew Nickerson about what makes the gallery stand out from the rest.