Spanning 25 years of a practice embedded in historical and empirical research, Zarina Bhimji portrays buildings and architectural surfaces as “protagonists” in an unpeopled, yet politically charged landscape of violence, migration and complex, colonial histories. Opening with two black and white seascapes and a vast selection of prints from the series Love (1998-2007), the exhibition segues from hazy horizons in Zanzibar, to abandoned residences and bullet encrusted walls in Uganda, with an ostensibly effortless sweep.

Belying the political complexity of Bhimji’s work, the depth and aesthetic texture of images such as Bullet Riddled (2001-2006) – where a decontextualised cell reveals traces of missile attacks among the anonymous scrawl of absent inhabitants – distances the viewer from social or historical specificities. As such, a strangely unsentimental tone pervades the walls of the Whitechapel Gallery in an exhibition where themes of loss, betrayal and political violence seethe ominously beneath the surface of buildings and terrestrial landscapes.

As loci of a colonial past, riddled with bullet holes, cobwebs and a cast of anonymous objects; the buildings Zarina Bhimji chooses to capture, on 35mm film or through various photographic techniques, exist in a seductively, precarious present. Imbued with the vestigial traces of history and personal memory, sites such as Entebbe Airport in Uganda – a site reminiscent of Idi Amin’s 1972 decree to expel 80,000 Ugandans of Asian descent – silently suffer the forces of material entropy and human abandonment, while asserting their presence as intriguing, contemporaneous objects.

Absent from the works themselves, details of the sites’ political significance are revealed in wall texts that, while offering insights into Bhimji’s ambiguous practice, do not encumber the viewer with history or unequivocal fact. Framed instead by aesthetic and atmospheric conditions – such as quality of colour and light – Bhimji’s architecturally grounded works refuse to succumb to the logics of narrative or documentation that often shape research-led artistic practices.

As T.J.Demos suggests, Bhimji’s research is “extensive”, however “[i]f anything, her work is informed by the blockage of information, as much as it results from the collection of historical research”. Harking back to the violence of Amin’s despotic regime, of which Bhimji and her family were victims, works such as Yellow Patch (2011) quietly contemplate the “echoes” of facts and political events without recourse to testimony or pedagogical language.

Taking centre stage in both the gallery itself and the exhibition’s beautifully illustrated catalogue; this immersive, 35mm colour film takes the history of trade and migration between India and Africa as a point of departure. Honing in on a few key locations across the Indian sub-continent, we see lifeless interiors littered with bundles of bureaucratic documents and items of deteriorating furniture; the once grand confines of houses and Victorian offices in Gujarat and the Port Trust of Bombay; elegiac scenes of the desert landscape of the Rann of Kutch, and glimpses of the Indian Ocean near the port of Mandvi.

Punctuated by a panoply of sounds; the sound of birdsong and violins seeping smoothly into the patter of footsteps, rain, or fragments of political speeches, Yellow Patch is an unusually mesmerizing film – its ambiguity affording a feeling of relaxation and visual absorption, despite the ghostly presence of past cruelties and imperial brutality.

With a poignancy and elegance unrivalled by Bhimji’s still photographic works, Yellow Patch glides through once-significant sites of human activity and colonial administration that today are but relics of a complex and unfathomably violent past. Captured with a “painterly” refinement, these rolling images of objects, architecture and interior spaces collide with heterotopic depictions of a present-day harbour in Mandvi. In the film’s final scene, we see wild dogs roam the port’s slate-coloured sands amidst the skeletons of dhows (wooden boats that are still constructed today). Unlike the disused buildings and forgotten documents portrayed earlier in the film, these colossal vessels appear to be under construction – creaking loudly in the windswept desolation of the beach.

As a wilfully ambiguous epilogue, the scene seems to enforce the primacy and persistence of the present in sites saturated with history and painful memory. In turn, the gallery’s decision to focus less on Bhimji’s preoccupation with the past, and more on her fascination with the contemporaneous presence of old buildings and historical objects, reinforces the artist’s assertion that her “…work is not about the actual facts but about the echo they create, the gestures and the sound.”

Through both sensitive use of text and quotations, and a deliberately anachronistic ordering of works (which create a kind of tapestry, rather than a chronological survey), the Whitechapel Gallery has managed – like Bhimji herself – to distance these works from notions of biography or personal catharsis.

Sharing the fate of thousands of Ugandan citizens, Bhimji’s displaced citizenship is an implicit strand that colours her work and bleeds through the walls of the gallery. Rather than tones of anguish or fury however, a sense of possibility and oxymoronic beauty permeates this very nuanced exploration of the sites, buildings and structures of power that have shaped the artist’s conception of self. In turn, the exhibition is both captivating as an aesthetic experience, and provocative in its intellectual and ontological connotations. Far from fetishising the objects of political or personal pasts, Zarina Bhimji is defined by a curiosity with the gritty materiality of the present, its constant formal transformation, and its ability to transmit beauty despite the terrible histories it harbours, and the violence it conceals.

Aesthetica’s December/January issue features History in Context, an extended piece on Zarina Bhimji’s work by Charles Danby. You can buy a copy here. 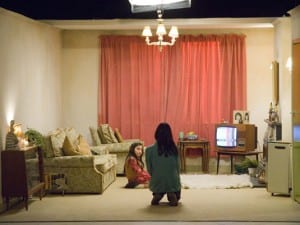 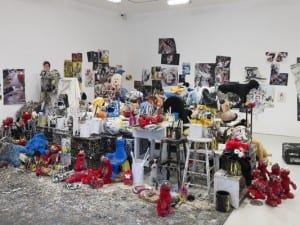 Joyce Pensato: Joyceland at the Lisson Gallery, London until 10 May has brought some of the world’s best known icons of popular culture and transformed the space into an impression of her Brooklyn studio in London.