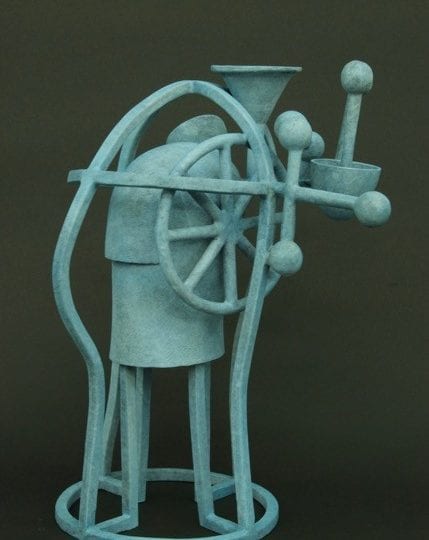 Stephen Daly’s first vision of sculpture came from a story his mother told him about seeing the Statue of Liberty from the hospital room in which he was born. The story sparked an inevitable course towards studio work as a sculptor.

A: How has your education helped to shape your practice?
SD: Disciplined work ethic, function under pressure, learn and challenged to improve (from peers), and the realisation that each of us must know our ”field”, its history, heroes and concepts. Better understanding of the role of the spectator. Also the need to articulate ones intent verbally (through critique and thesis).

A: Many of your works use fabricated metals and casts to create large, dynamic sculptures. How do you begin to gather your ideas for your next project and how do you bring these to life?
SD: The “gathering” occurs over time by looking, creating images and wandering around in my head. Occasionally an idea gets fixed quickly, for instance with MENTORING (Spain) the notion came whilst walking around the campus that was to be its home. I realised that teaching and learning is really very personal and not hierarchical or limited to instruction from teachers to students but includes student to student, the environment of curiosity and even strangers so the idea of the little head (giving info) to the big head (receiving info) occurred immediately.

Usually its not pre-planned. I just start and let each move inform the next move until some feeling or theme comes into focus. Once that occurs the rest can build on such a beginning. This is true for the studio practice including drawing or combinations of drawing and sculpture. This is not simply intuition but action based on accumulated experience.

A: Why do you think that sculpture is important as a contemporary medium?
SD: Object based sculpture, some installations, and sculpture parks personify the occupation of, or setting aside of real space that which we walk in. It can operate as a marker, a sanctuary, or an identity.

A: How does scale impart some kind of meaning onto each work?
SD: Scale adds familiarity if the work is our size, a sense of wonder if smaller and awe if it towers. The difference between work viewed indoors and the same work taken outdoors alters our sense of scale and points to the importance of site or location in determining size.

A: How do you imbue complexities and various meaning into the structures?
SD: By combining organic (curvilinear) and mechanical (straight) an immediate vocabulary is established. This can be a complimentary relationship or a dichotomy. Within this architecture synthetic, symbolic or referential forms are dispersed. The viewer’s accumulation of and relation to this dispersal will become their interpretation of content given the clues available.

A: How important is it to you that the works communicate with their audiences – is it important that a certain idea is conveyed, or do you think it’s more about individual experiences?
SD: I feel it’s both. I try and leave behind enough visual clues to move the viewer in a certain direction but leave the conclusion, or questions, up to them.

A: Is there a certain conceptual idea that links all of your collections, including your ink drawings?
SD: I am interested in how we communicate through looks, speech, context/proximity and emotional or psychological state.This position excludes a text-based conceptualism in favour of humanism.

A: What projects are you currently working on?
SD: I am thinking and making sketches for developing a public art proposal for a campus. The site is near an experimental science building. Four new drawings are in process. Three relate to nature (invented floral forms), the other is very structured and may have been influenced by thinking of STEM relative to the public art proposal. 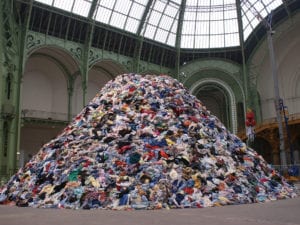