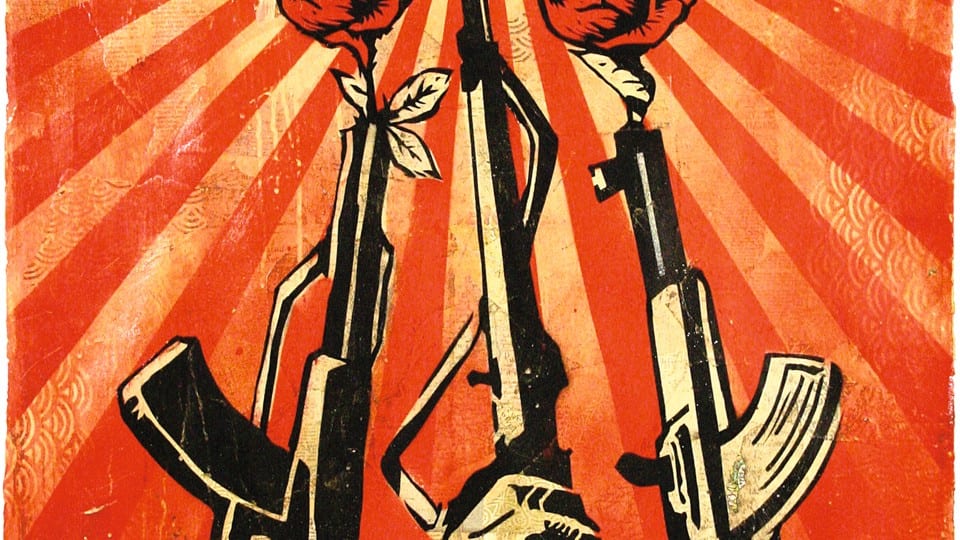 Situated on walls, the pavement, telephone poles, windows, billboards, trains, cars, houses – we see it everywhere we go but rarely do we stop and actually look at it: urban art is ubiquitous.

Graffiti, is the most prolific and popular form of street art, however it is but one facet under the burgeoning umbrella term of urban art and is itself considered by some artists and critics to be, “…obsolete, inadequate, and irrelevant…[and] a feeble “attempt” to describe an historical and cultural movement originated and created in the ghettos of New York City.”1 A rather harsh criticism but one with an element of truth, as graffiti is too restrictive a term to use when considering the different forms of urban street art. Spank the Monkey (curated by Pedro Alonzo and Peter Doroshenko), which opened this September at the BALTIC, brings together over twenty-two international artists involved in producing and creating urban art.

The term graffiti, derived from the Italian sgraffio (scratch), consists of everything from ‘throw-ups’ (name painted quickly), to ‘masterpieces’ (elaborate spray-painted works using both text and image), to stickers. Urban art is normally traced back to its origins in the writings (graffiti) of the New York based writer Taki 183, who came to fame with the publication of a 1971 New York Times article on his writing. The emergence and rise to fame of artists such as Keith Haring and Jean-Michel Basquiat (street tag SAMO) in the 1980s New York art world (both died tragically young: Haring of AIDS in 1990 and Basquiat of a heroin overdose in 1988), brought graffiti art to the forefront of contemporary art and culture.

The rise in popularity of urban art brought to a head questions of authorship and the inevitable inquiry into what can be considered art and what physical sites are appropriate (especially with regards to artists such as Banksy and Shepard Fairey who use any available public space, whether allowed to or not). Dr. Lakra, a Mexican artist included in the BALTIC show, goes one step further than Banksy and Fairey, moving from physical architectural space to that of the body as a site for his art. However, unlike his collage-based works in which he appropriates old 1950s pin-up girls and tattoos the image surface with ink, the works that he physically tattoos onto people’s skin are not for a public audience but rather for the individual’s personal enjoyment and appreciation, he says, “…the art in a tattoo is only fore [sic] the wearer.”

Urban art is an amalgamation of dichotomies: inside/outside; public /private; high/low – dichotomies that ensure its survival as well its dynamic, changing nature. Often the works, though prolific, cannot be explained or understood which causes consternation in the viewer. Shepard Fairey’s Obey Giant campaign, described by Fairey as “an experiment in Phenomenology”, is quite simply a sticker campaign using the manipulated image of the wrestler Andre the Giant in the form of a sticker. Fairey’s purpose? To provoke thought and discussion; to stimulate in order to incite. The parallels between Fairey’s work and that of Orbi (aka Space Invader) is self-evident as both use iconographic images in public spaces, yet the mediums they choose are quite different. While Fairey uses stickers, a quick and efficient means of getting his work up, Orbi’s method is much more arduous and time consuming as it involves the physical labour of tiling and cementing the mosaics. Orbi, who creates site-specific mosaics in the design of the computer-game Space Invaders, usually puts up between three to five pieces during one nights work: a process that also includes the photo-documentation and naming of each piece. He describes his work quite literally as an invasion of space and as a “way to tell a story […] a way to leave a track behind me.”

The explosion in public art over the past thirty years can be attributed to the growth and development of urban art and its increasing popularity. Artists such as Fairey and Faile (a New-York based collective of three artists), reflect an interest in design, popular culture, and fine art in their work: Faile, who cite artists as diverse as Robert Rauschenberg and the film director Stanley Kubrick as influences, have branched out beyond the mainstream idea of urban art and started producing limited-edition books and clothing. Though they have quite a diverse oeuvre they state that their street art and design-based work play off each other so that it is not a matter of having to choose or compromise: “The street is more organic, it informs and inspires a lot of the work we do in the studio for shows, but it is different, it’s more spontaneous and less controlled.”

There is no longer a definitive framework within which urban artists can be categorized; glancing over the list of artists exhibiting at Spank the Monkey is a telling indication of the variety of artists considered under the rubric of urban art. Chiho Aoshima, a Tokyo-based artist who creates fantastical urban landscapes reminiscent in tone and palette of Lisa Yuskavage’s idealized female forms, is indicative of this broadening of the term. Aoshima’s work, compared to that of Faile, which is quite vibrant and design-based, is relatively soft and muted. It is not what one imagines when they think of urban street art, which is precisely why the term itself is so difficult to define. Spank the Monkey is an significant and vital opportunity for contemporary urban artists to not only exhibit their work to a wider audience but to gain validation and recognition for the work they produce; work that is often ignored or deemed as merely decorative or the scrawls of young art enthusiasts. 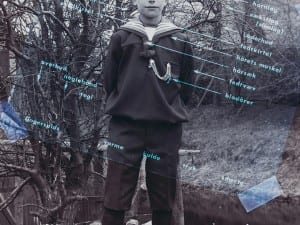 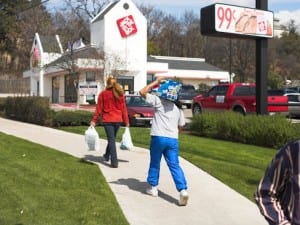