It is an interesting time for an exhibition in Athens like Ileana Tounta Contemporary Art Center’s Sensitivity Questioned. Considering it opened the day before an angry mob attempted to storm the Greek parliament and a bank was set on fire. Amidst all this anger, three people died. Perhaps it is a time to question sensitivity after all.

In the words of the curatorial brief, the exhibition wants to “articulate a new view of the ‘feminine’”. Uh oh. Now we’ve entered dangerous territory. If the attempt is to create new perceptions of femininity, then we are crossing a well-trodden path that is so well trodden, blood, tears and an ample number of burned bras litter the trail. It is interesting, then, that the female curator, Iliana Fokianaki has only decided to use male artists – 18 to be exact- inviting them “to approach their subject in ways that may perhaps strike the viewer as ‘feminine’”.

But what is femininity? According to the exhibition’s catalogue: “A woman simply is, but a man must become. Masculinity is risky and elusive. It is achieved by a revolt from woman, and it is confirmed only by other men. Manhood coerced into sensitivity is not manhood at all. ” Another supposition is that the word ‘sensitive’ is seen as a feminine one and that “the definitions of femininity and masculinity have been solid for centuries now.” It then explains that the exhibition’s aim is to instead seek the feminine, sensitive side of men and in turn redefine what it is to be sensitive and feminine.

Of course, from El Greco’s St. Mary Magdalene, Degas’s ballerina’s and – in the case of this show – Ryan McGinley and Gregory Crewdson’s intimate portraits of a young, wet, naked woman and a young, naked, couple in a wooded grove respectively, would it be wrong to suggest that men have long had the freedom to explore what is sensitive, or what they are sensitive to, through their art?

Maybe that is what Stephen Sutcliffe touches on when he pairs images of women wearing skirts and heels with men in suits with briefcases narrated by a reading of poster girl of female anguish and struggle in the face of a male-dominated world, Anne Sexton’s 1967 poem, Said the Poet to the Analyst, in a video facing the male/female divide head on. Emmanouil Bitsakis does something similar when he replaces a queen’s face with his own in an expertly rendered, tongue-in-cheek orthodox-sized icon nod to idolisation, nobility, tradition, and hierarchy.

Reminiscent of Angus Fairhurst’s furious markings on pages of British newspapers, Antonis Donef’s networks of line and shape drawn carefully onto pages from a Victorian encyclopaedia build organic shapes that feel rooted, earthy yet ambiguous, much like Daniel Silver’s painted portraits rendered in fluid tones of green. Panos Tsagaris delves into symbolism and the occult, a characteristically feminine trait in human behaviour intrinsically intertwined with nature, offset by the figure’s androgyny. Man and woman as one suggests a balancing of two opposites or the coming together of two halves.

Christos Delidimos’s dynamic contribution to the show is a streamlined selection of hand drawn imagery telling the story of man and the beast within. An installation of sorts, a nod to Athena in the form of a paper owl sculpture overlooks the scene created by three smaller drawings followed by a paper-built monster on a ledge, with a caged miniature nearby. Above, a tiny black and white scene and a large image of a solitary almost ‘anti-Adam’ skulking through a treacherous, forest-wasteland is punctuated with a drawing of a deer, speared high into the wall by menacing black poles. Echoing Homeric war, Delidimos paints a dark, poetic picture of a world without women, or a world in conflict.

Nevertheless, if that world without women is anything like Michael Robinson’s video of a domestic scuffle taken from American soap opera, Little House on the Prairie, with 80’s hit Hold Me Now by the Thompson Twins serenading the scene; it would be a hell of a lot more peaceful – or less passionate. But essentially, Robinson suggests a world without media-reduced abstracts would be a much better place for everyone.

At this point I think back to Theo Prodromidis’s black and white photo-narrative that welcomes visitors on the smaller, first floor exhibition space. Prodromidis’s lens longingly follows a beguiling woman through a park in London. She appears distant, out of reach, strange. Both tender and voyeuristic, the photographs expose a natural divide that exists between two people, let alone men and women. As we make our way further into the 21st Century, with all the changes that come with it, it is fitting the exhibition begins and ends with this piece. Where is that woman? Does ‘that’ woman exist? Where is the woman’s perspective in all of this? Will there have to be a masculinity questioned sequel that might allow women to define masculinity? (Not a bad idea).

Still unsure whether the exhibition manages to answer or support what it claims to set out to do, I turn to Daniel Subkoff’s intricate treatment of two books – Aleister Crowley’s The Book of Wisdom or Folly and Danto’s After the End of Art to sum it all up. Lines from pages have been painstakingly cut and joined to unite the two books. The top line reads: “For shame! Is it not the most transient of all the Wisdoms of the Cosmos that no two beings are alike?” It’s true. No two people can ever be the same. Even our own, personal views on femininity, masculinity, or sensitivity are subtly different.

This is how the show saves itself. Though by raising the issue of femininity it manages to shut female artists out, something any staunch feminist of 70’s calibre would have abhorred, the works of participating artists – and the placement of them – get you thinking about roles imposed on us as humans today, in relation to the roles we play within the societies we find ourselves in. In turn, we might consider who, or what, we perceive ourselves to be at this moment in time. Maybe that might bring us closer to understanding what we have become in order to contemplate how we will evolve. That’s something for all of us to think about – man or woman.

Proceeds from the exhibition will go to ActionAid Hellas to fund programs that support women in India, Cambodia and Haiti.

The exhibition continues until 3rd July.

Guest Blog written by Stephanie Bailey. Originally from Hong Kong, Stephanie currently lives and works in Greece. She is the Arts Editor of Athens Insider, and contributes to Art Papers, Odyssey Magazine and Naked Punch. 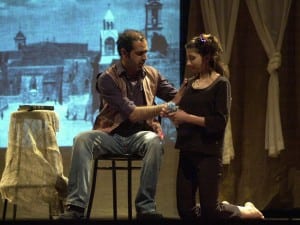