Funded by Wellcome Collection, London, Somewhere in Between is a collaborative examination of the human condition, drawing together the gallery’s key concerns: science and art. The exhibition works by exploring how art can aid medical research practise, and the consequential societal attitudes surrounding notions of the body, senses and desires. By pairing medical professionals with visual artists from across the globe, four conditions, ranging from psychological to physical ailments, are thrown into the spotlight, offering new a way to understand often unaddressed issues such as human sensibility and sexuality.

The four projects have a human focus, yet often examine other elements within nature as with Maria McKinnery’s (b.1982) cattle-centred Sire (2016). Large calves dressed in knitted genomics are seen in naturalistic settings, alluding to their genetic-makeup and their place within the food-chain. As well as commenting on the dairy and meat industries, the photographer adds a social element, positioning herself in an Irish farming community and inadvertently evoking memories and agricultural tradition. These images observe the relationship between man and nature, highlighting a history of interventions which lead to these live animals becoming objects of possession.

Diving into the immense blue ocean, Martina Amati (b.1969) and anaesthetist Professor Kevin Fong’s video Under (2015) documents the subversive journey of a free diver who defies the accepted limits of the body and respiratory system. The act of exploring the sea without breathing apparatus seems a frightening prospect at first, yet the installation reflects the serenity and calm of the untouched depths, placing the figure as ground-breaking and so pushing our understanding of what is physically achievable.

Working on a similar concept, Daria Martin’s (b.1973) and neuroscientist Michael Banissy’s duel works Sensory Tests and At the Threshold (2012) depict individuals with mirror-touch synaesthesia, a little-known neurological condition which allows the sensations of others to be shared, felt and appreciated by those who are diagnosed. Shot on a 16mm film, like much of Martin’s previous work, the film utilises themes of connection and emotions, developing ideas surrounding the limitations of subjective human senses. This, paired with the knowledge of the collaborative efforts, cements the exhibition as a place of discovery, opposing accepted views and frameworks of working, and so concluding that a visual language can assist the evolution of scientific and sociological thought. 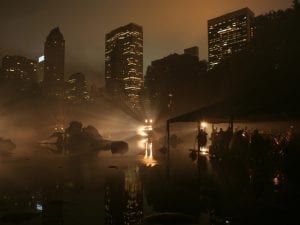 The Broad presents A Journey That Wasn’t, a show which asks how the intangibility of time manifests within personal memories, informing creativity.