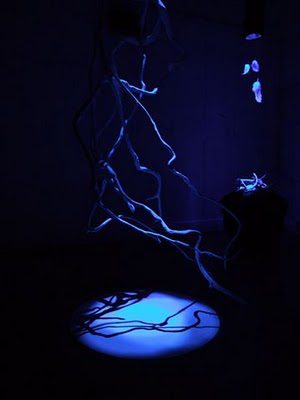 Every year, Sabhal Mòr Ostaig, the centre for Gaelic language and culture on the Isle of Skye, hosts an artist residency programme for artists interested in producing work informed by an engagement with Gaelic language, culture and environment. One of the current recipients is installation artist Gill Russell, and some of the work she’s produced in the residency is now on show, for the month of January, in the downstairs gallery at the Royal Scottish Academy. Russell works with sound and light, creating installations that explore and unsettle the sensory perceptions of visitors. Previous work has included Sòlas (2008), a site-specific installation in which viewers were invited to take a nighttime walk through the woods of Glenuig in the highlands until they reached seven fiberglass globes. The globes absorbed light from the sun in the daytime, and reflected it back, blue-tinted into the night-sky. Russell also worked in collaboration with the astronomer John Brown on the ‘constellation project’, in which children from eight Scottish schools chose stars to form a new constellation in 2009.

As well as an artist, Russell is a trained scientist, having completed a PhD in Biochemistry at Aberdeen University before crossing town to enroll at Gray’s School of Art. There is something of the sensory-experiment in her light and sound installations, multi-sensory situations the viewer has to adjust to. Entering Russell’s cave-like installation at the RSA, you step through a thick black-out curtain. It’s a disorienting experience- the room is extremely dark, with just 3 dim blue sculptural installations. I couldn’t initially make out if there was anyone else there until my eyes refocused to the low level light. There’s soft background percussion, sometimes like a heartbeat, sometimes like an echo, sometimes like the sound of running water.

The piece is inspired by ‘Uamh an Ard Achadh’, meaning ‘high pasture cave’, an underground cave used since Mesolithic times, which Russell came across in her time on Skye. The cave has been connected to use as a religious and votive site, in particular to the Celtic Earth Goddess Brigid. Brigid lends an important structural element to Russell’s installation. She was a Celtic ‘Triple Goddess’, one goddess but often ambiguously represented in triplicate along with her two daughters, also named Brigid. Correspondingly, the three light sculptures are individual pieces themselves but part of the larger installation as a whole. Distinct but connected images, all difficult to make out in the dark. As you enter the cave, you’re confronted by twisted blue-lit branches suspend from the ceiling all the way down to a disc on the floor, on which the branches cast a network of shadows like rivulets. The branches simultaneously suggest bones and helical DNA structures. To the left, at knee-level, there’s a hollow, feathery nest-like orb encasing an illuminated blue ovum, floating like an egg on a spongy pillow. The most obvious allusion is to a womb, but the blue light is strange, more distant, even extra-terrestrial. At the far end of the room, in perhaps the most intriguing of the pieces, feathers are suspended from a blue ceiling-light above a pile of bone-like antlers resting atop a dark and muddy spherical heap. The feathers shimmer and flicker in the light at the faintest hint of movement- they could be falling from the sky or rising from the pile of antlers like smoke.

Every aspect of the piece has been carefully considered. The use of organic materials gives all three sculptures an air of fragility. The sounds I was mishearing are in fact recordings made by Russell inside the stream passage in the cave of the musicologist John Purser playing ancient instruments. You pick up the muffled sounds and echoes of the cave in the unfamiliar notes and sounds of bone flutes, harmonic singing and bronze horns. One of the most interesting aspects of Russell’s installation is the way her interventions in sound and light alter the viewer’s perception of time. The piece has a timelessness that stretches back (by evoking the ancient rites performed in the cave) and outwards (by simultaneously suggesting the otherworldly and cosmic).

More pragmatically, you have to slow your perceptions as you adjust your eyes to the dark and move alertly round the room. I found myself creeping around, part nervous and part reverent, as though the low-level lighting and thumping heart-beat audio had triggered a heightened instinctual state of darkness-alert, a connection to the Mesolithic origins of the cave. ‘Uamh’ is a humbling, thought-provoking installation. 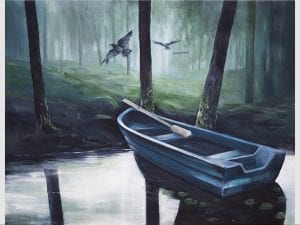 Swedish artist Marie Åkerlund’s subtle works revolve around the fragile, ethereal and essential notion of inspiration. We speak with her to find out more. 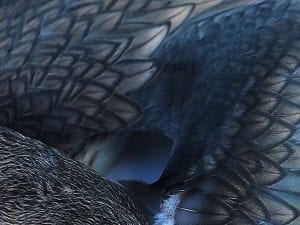 Longlisted for the Aesthetica Art Prize in 2016, Constanze Kratzsch’s Cormorant emphasises the elegance of the bird by using a minimalist design vocabulary. 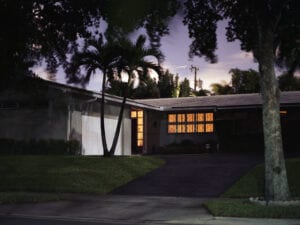