Joan Miró moved into his own purpose-built studio on Mallorca at the age of 63 after decades of working in cramped spaces in Barcelona and Paris. The new atelier – designed by the Spanish modernist architect Josep Luís Sert – was big, airy and a magnet for the expansive Mediterranean sun, and must have struck the artist profoundly. He marked the occasion by destroying 80 percent of his extant work and for the next 26 years, he produced paintings and sculpture that surpassed his earlier work for fearlessness, anger and experimentation with media. Such was the significance of the studio that upon his death it was preserved, and has survived to the present day without alteration – even his empty champagne bottles still stand in the places they were left. The Barcelonan Galeria Mayoral has recognised the 60th anniversary of the founding of the Mallorca studio, recreating it in London. The show contains 25 original paintings and drawings, alongside correspondence between the artist and architect and various ephemeral ornaments, postcards, photographs, paints and furniture that strew the studio.

Do not go to this show expecting a simulacrum of the original studio. The real Mallorcan atelier is spacious and light-filled, with a mezzanine level to view Miró’s canvases from on high. The Mayoral version is a cameo re-enactment, which fits a lot of material into a somewhat small space. Yet it has been executed with care and integrity – and a British art-loving (and art-buying) audience does get to engage with Miró’s work in a novel context. Miró’s paintings in the show are beguiling and memorable. Even though he played with a narrow selection of colours, bulbous forms and scrawled lines, each painting has the energy of a fresh departure. As Joan Punyet Miró, the grandson of the artist, recalled, “repetition was a forbidden word” in the studio, as he sought to subvert routine production, which could threaten the urgency of his images. Painting against tradition and with such freedom in Franco’s fascist Spain was a necessarily political act that took great bravery, and gives his paintings a sense of purpose and consequence lacking in so much contemporary abstract work. To have done as much in his sixties, seventies and eighties is an extra marvel. 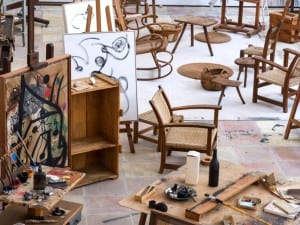 60 years since Joan Miró’s studio was founded in Mallorca, the workshop has been reconstructed in London: a detailed work that mirrors the poetic environment of the avant-garde artist’s atelier. 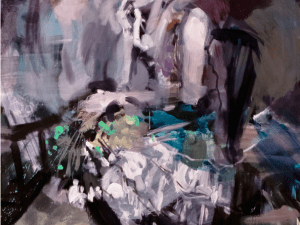 Anna Mcneil’s practice is based upon narrative ambiguity. She was included in the 2017 Lynn Painters Stainer’s Prize Exhibition.