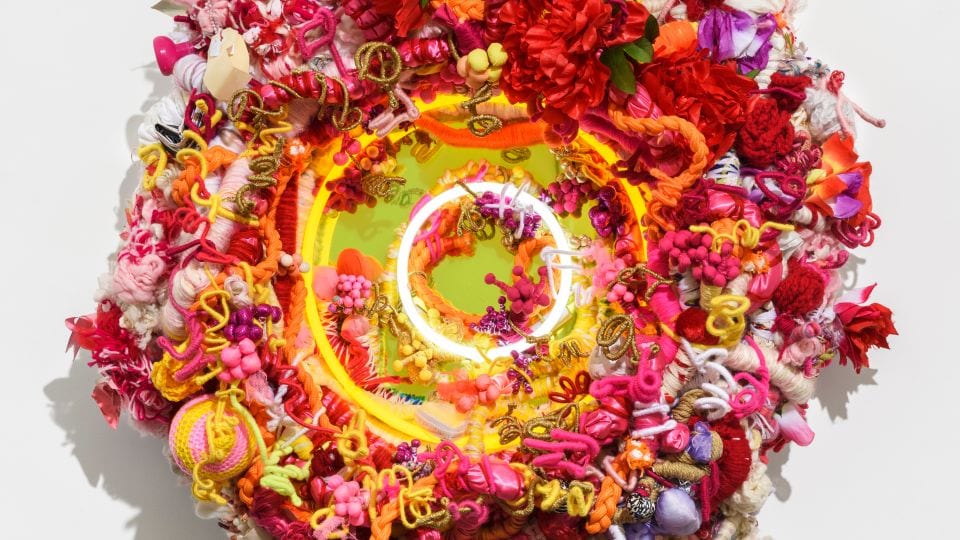 Hiromi Tango’s sculptural pieces involve colourful materials that are constructed into large-scale, provoking formations. Her practice also incorporates performance which enables her to connect with her audience. Tango’s current show Fluorescence can be seen at Sullivan+Strumpf, Sydney. The artist’s working process sees no beginning and no end. She explains that her structures “grow, and cut, and fly and connect.” Made from donated objects, she constantly takes fragments from previous works and grows them into new pieces. The Fluorescence series sees Perspex encapsulated with neon and woven textiles. Objects are finely entwined with other elements which connect the piece until it forms a wondrous construction.

The development process is organic,  as described by Tango: “The sculpture is ready once I can engage as one of the viewers. It is like an emotional and psychological journey. As each piece is deeply personal, I am engaging raw emotions and bodily responses, it keeps changing.  I take time and allow it to mature until it is ready to depart from my body.” Creating the works is labour intensive and highly physical which is a necessary means for Tango to process difficult emotions: “Fluorescence has been a unique experience where my brain and heart and other organs are opened and activated through the process. I feel as if my vessels have been opened and blood is starting to flow more regularly, which is new to me. Through the art making process, I am understanding something important for me.”

There is a strong sense of honesty and rawness found in Tango’s work which undoubtedly fuels the senses, awakens curiosity and seeks closer observation. The instrumental drives behind Fluorescence came from a sentimental place: “My father has been bedridden for a few years, but particularly in the last few months. His hearing, eyesight, and memory – his brain and bodily function have deteriorated quite dramatically. I made series of artworks based on the memory of my father and the evolving relationship with him: our similarities, a remembrance between us.” She explains further: “On a personal level, the works are a way of connecting the segment of memory about my father that at one time I deliberately lost. Now I am re-gathering the essence of him, of what I remember of him, and trying to understand something very important – although I don’t yet know what it is.”

The works in Fluorescence are flooded with colour which is representative of particular stories, memories and thoughts. The multitude of warm hues presents a feeling of contentment, a sense of happiness. There are however, within this assortment of vibrant energy, darker feelings. Tango came to learn of the deterioration and breakdown of the eyes during the ageing process: “You don’t see fluorescent colours as vividly, and it looks like much milder colours, it made me think about how my father is engaging with his everyday life with limited colours, light, sound, and physical movement. This compelled me to make artworks around the theme of fluorescence and light.” She continues: “Fluorescence is dancing with my father of now and of old and it is connecting the lost memory and essence of my father particularly when he was younger and energetic. I do not want to forget who he was, and I also want to try to understand his behaviour when he was younger.”

The search for this intimate connection to Tango’s father layers the works with poignancy, sentimental markers and innate traces of the past. She said: “It is the neural, energy, and vascular dance. It has been the process of 10 years work of my past, on which I have further developed the concept and conducted research on memory deterioration in my father’s case, to understand how I could possibly support and comfort him. Then the concept Fluorescence was finalised.” Each fixture, every piece of string, every glistening object was given sincere attention, patience and time, all of which is made apparent to viewers when in the presence of her work. 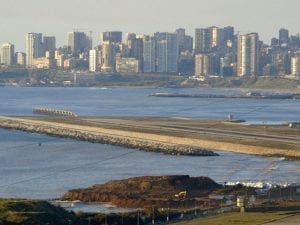 In a Hammer Projects show, Beirut-based Marwa Arsanios investigates the state of contemporary Lebanon through the lens of its landfills. 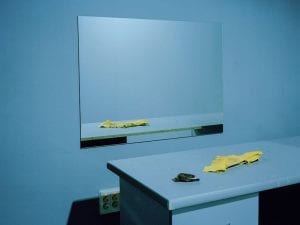 In a culture defined by a continual stream of news, it is easy to become detached. The nominated projects reveal a human perspective.

We talk to painter Carl Melegari’s about his exploration of form and colour through the physicality of paint and his upcoming show at Edgar Modern, Bath.