Second Self brings together the works of two emerging photographers, Juno Calypso and Carolina Mizrahi at Arusha Gallery, Edinburgh. With similar thematic and artistic concerns, both sets of works confront the viewer with an unsettling and challenging aesthetic of what it means to be female in today’s world.  With the imbalance of  beauty standards and constant drip-feeding of idealised images from the media, the new exhibition highlights the absurd representations of self through the portrayal of their alter egos. Aesthetica catch up with Calypso and Mizrahi to discuss their works as a whole and in dialogue with one another.

A: How do you feel as though your imagery battles contemporary issues of femininity, perhaps most significantly in the controversy of beauty, and what this means?
JC:  I don’t feel my work is in battle. In a way it does the opposite, it embraces and celebrates the weird world of contemporary femininity, but emphasises the weird. You’re right though. When I started this project I was a student, I’d just read The Beauty Myth by Naomi Wolf, and I was very angry about the ways women were being robbed of their time and money. I guess that anger could still be lingering. Things have changed a lot though. There’s more talk of choice-feminism. Social media has given women a platform and a community where they can enjoy and critique the beauty industry simultaneously, and ultimately reclaim something that was previously out of our control.

A: Do you think that your artworks have an intention, and if so, do you think it’s important for art to have this amongst its aesthetics?
JC:  I like art that has no intention, I like art that has loads of intentions. There’s room for both. I can only speak on what I do, which is photographing myself – a woman. I think if you are photographing women you really need to do some research into the history of the practice before you start perpetuating something you don’t realise is harmful. There’s nothing wrong with wanting to make pretty pictures for the sake of it, but I think you just need a sense of moral responsibility.

A: Could you talk a little bit about the fictional character you create in your works – “Joyce” – who seems to act out an alter ego. How has this figure helped to explore difficult issues and perhaps, at times, absurdity in the everyday?
JC: The starting point for Joyce was her face – I wanted to make this hyper-feminine character who was putting so much effort into her act of seduction that she winds up looking extremely exhausted, bored and on the verge of a nervous breakdown. And I wanted the audience to be laughing with her, not at her. That’s basically the punchline of all my images. Comedy is my definitely my way of exploring difficult issues.

The theatricality of the character also helps to lure different audiences in. People get excited about the aesthetic but then they have to start thinking about what I was thinking about when I took that picture. You get to lure people into your head via nudity and a big red wig.

A: How do you think the scenarios in which “Joyce” features comment on what it means to be a woman in the society we live in today?
JC: I can’t speak for all women. We all have very different intersectional experiences. I do find myself drawn to scenarios that could be considered universal for women, in a very cliché sense. Sex, beauty and marriage – but it also comments on the relationship we have with our selves – which leads to notions of solitude, seduction, desire and disappointment – emotions considered as very universal regardless of gender. Rather than trying to dissect beauty or marriage, I think my work simply questions why these things are regarded so highly, how they really make us feel, and asks – how are women’s private desires are being bought, packaged and sold back to us?

A: Do you think there is an ethical problem in the way that the images are aesthetically pleasing, and yet, are self-consciously pointing out something unsettling about this?
JC:  Not really. I think it’s counterproductive to say political work should only abide by certain aesthetic rules. Especially an oppressed group making work about being an oppressed group. We shouldn’t tell the oppressed how exactly they should be protesting, or expressing themselves.  Maybe people would take my work more seriously if it were black and white and I burnt holes in the prints – but I think the antidote is in the poison.

I like perfection when making photographs, and I do the same in my personal life, when presenting myself as a feminine woman. So it brings that torturous desire for perfection into question. But luckily – if you, like other viewers, have instantly noticed that there is something unsettling, then I feel like my manifesto has been successful.

A: Your works, similarly to Juno’s, use a prevailing palette of tonally constant pink. How do you think this colour moves within the themes of your work?
CM:  Gender stereotypes are themes that I enjoy exploring. In one way or another, I very regularly use pink on my images, not necessarily for the same purposes. Although, I do like to think that by constantly using pink I am somehow making a point that female artists do deserve their space and stereotypes should be broken.

A: How do you think your images create a sense of a modern still life, one that perhaps creates a larger conceptual depth despite their minimalist compositions?
CM: Our concept of beauty has deeply transformed over the decades. Taking inspiration from old painters, I like to play with notions of modern and traditional by revisiting classic fine art styles on a modern way. The minimal colour palette is connected with gender stereotypes and the representation of women in media, aiming to raise questions in regards to social behaviour and gender equality.

A: How do your photographs seek to uncover or address concerns about advertising and the media?
CM: The representation of women in advertising and media is another theme which I really enjoy researching and exploring. Why pink is a colour associated to the female gender? I have been questioning the representation of women in media by playing with notions of race, body shape and beauty standards in general. Whenever working on personal projects, I try to ensure that my casting it’s including a diverse range of beauties. Despite the fact that I like to play a lot with digital manipulation, my subjects remain mostly unretouched and unified by race-less skin colours.

A: It’s interesting that your works use colour-blocking and impose it upon their audience. Do you think that it is your intention to unnerve your onlooker in this way and raise awareness of how gender is often solidly defined by the media?
CM: Yes, I believe that media and advertising plays a major role in defining beauty standards and social behaviour. On this project, by imposing a unique colour palette, I was aiming to investigate why pink is a colour deeply associated to the female gender and how viewers would respond to this body of work. By presenting this series alongside a whole pink installation, I invite viewers to experience the artwork on a three dimensional level, it’s really interesting to see the differences between men’s and women’s interactions in relation to the colour pink.

A: How do you think your works respond to Juno’s and vice versa?
CM: I believe me and Juno as female artists are somehow questioning the representation of women in advertising, taking responsibility as image-makers and trying to raise awareness in relation to gender stereotypes and beauty ideals.

For more information about the show: www.arushagallery.com To find out about the artists: www.junocalypso.com, www.carolinamizrahi.com 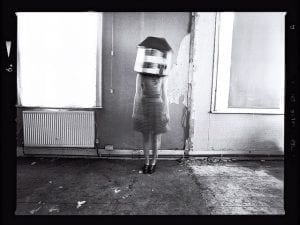 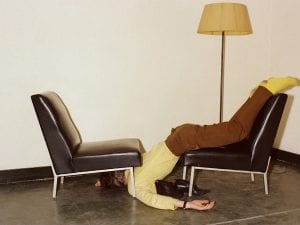