Barren environments can offer fertile ground for artistic and conceptual endeavour. These aesthetically striking, isolated and often politically charged regions provide inspiration for an array of photographic and moving-image work. The second edition of PHOTOFAIRS San Francisco brings together a diverse range of practitioners that investigate such locales from multitudinous angles.

For example, Mishka Henner (b. 1976) grapples with contemporary political issues whilst observing the world from above. The practitioner examines the role of the medium in the age of the internet, and is known for erasing elements of canonical works and using satellite imagery as a starting point for investigations into surveillance systems. These alternative landscape photographs raise questions about authenticity and notions of privacy in a digital society.

Noémie Goudal (b. 1984) also foregrounds notions of artificiality and reality, making temporary architectural interventions into untouched surroundings. The images question the changing relationship between man and the environment, blurring the boundaries between the real and the imagined whilst conceptually addressing ecological issues. In a similar way, Maroesjka Lavigne (b. 1989) records remote corners of the earth. Land of Nothingness – a series which possesses a similar uncanny quality – captures the sublime topography of Namibia, one of the least populated regions in the world.

Using state-of-the-art technology Sophie Clements’ film, How We Fall, transforms the studio space into an evocative arena. The piece investigates the shifting fortunes of societies and governments by observing falling cement in 360 degrees, presenting a single moment of change from innumerable camera angles. It forms part of the fair’s new Connected initiative, which foregrounds innovative and topical approaches within the realm of video art. This year’s iteration, The Channel of Democracy: Womanhood, Power & Freedom in Video Art, explores the medium’s power to highlight current social issues, offering dialogues about equality and representation through 16 female and non-cisgender binary artists. Other meaningful contributions include Zeina Barakeh’s animation Slam Bang Blue, which addresses the mechanisms of war and the polarisation of contemporary politics. 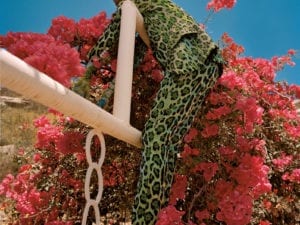 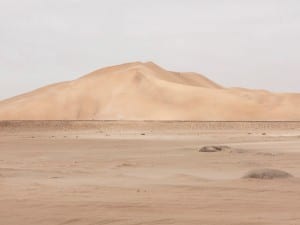 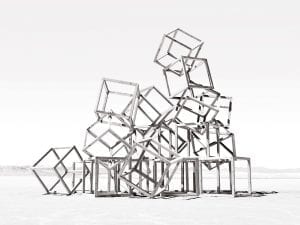 Noémie Goudal’s Telluris, a series of images shot in the Californian Desert, investigates ideas about the formation of the Earth’s landscape.