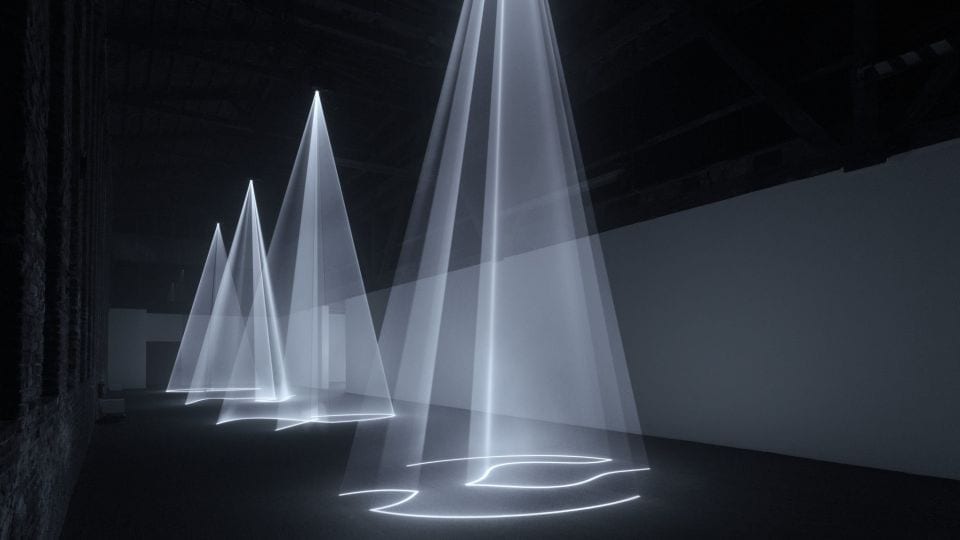 The digital age has changed our perceptions of physical space. The rise of the internet, cinema and new media such as VR brings new, indefinable realities. Contemplating this evolving definition of the world, a selection of today’s leading practitioners have looked into swapping traditional artistic media for the visual language of technology to create immersive installations and performances. Pioneering artist Anthony McCall’s (b. 1946), work is currently on display at the Hepworth Wakefield (until 3 June), which exemplifies this. Highlighting parallels between his practice and the all-encompassing nature of the moving image, he notes: “I was drawn to cinema, rather than light.”

The exhibition, entitled Solid Light Works, premieres three large-scale light installations which mimic the act of scribbling on paper – embodying the transition from analogue to digital. White light projected in geometric outlines gradually transforms flat forms into three-dimensional projections. Combined with a thin mist, these illuminating investigations dominate the unending darkness of the gallery. Despite the works being perceived as sculptural, the artist emphasises how he was “drawn to the question of what was irreducibly ‘film.’” Expanding on this notion, McCall explains: “My work actually exists at the point where drawing, sculpture and cinema overlap. When projected, the drawing produces a sculptural form in three-dimensional space, but that sculptural form has a cinematic structure, which means that the form is not constant but shifting, and it discloses these changes gradually, over time.” The intersection between art and film is further explored by Olafur Eliasson: Reality Projector at Marciano Art Foundation, Los Angeles (until 26 August). The monumental piece challenges the visible borders of a confined gallery space whilst referencing the space’s former function as a theatre. Engaging with the city’s rich history of filmmaking, the piece turns the space into an abstract, three-dimensional film. The 13,500 square foot floor is consumed by video, with ever-changing shadow play abstracting the architectural structure. Reality Projector draws on the engrossing effects of technology, as viewers are lost in a new, light-induced physicality. As McCall reflects: “Visitors become absorbed by the paradoxes and they tend to stay for quite a time in the installations; 30 minutes to an hour is fairly normal.”

In a similar way, Mischa Kuball’s (b. 1959) pieces, on display as part of Res-o-nant at Jewish Museum Berlin (until Summer 2019), fill 350 square metres with rotating projectors, light fields and sound. The addition of sound ­– which comprises 60-second clips by 150 different musicians – to a never-ending loop, mirrors over-stimulation in the contemporary age. The exhibition will periodically flow onto Berlin’s streets, expressing how spatial boundaries can be distorted, blurred and challenged by artistic practice. By illuminating the complexities of material forms whilst representing sensory information, these works push the boundaries of their media. Finding renewed importance in today’s increasingly saturated landscape, the exhibitions offer tranquillity in simulated realities whilst reflecting the wider world, proving the medium’s potential as an agent for change. As McCall concludes: “Light may be intangible but it isn’t uncontrollable.” 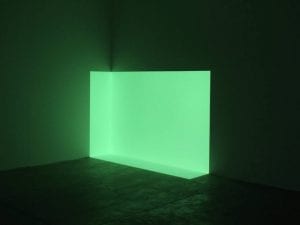 James Turrell is internationally known for an engagement with natural and artificial light sources, expanding the boundaries of perception. 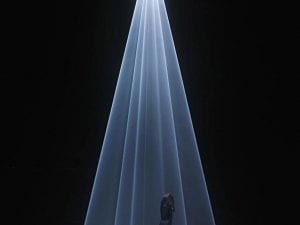 Split Second, a new exhibition of works by Anthony McCall, occupies the boundaries between drawing, cinema and sculpture. 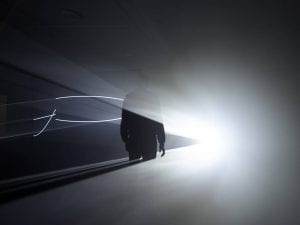 Creating three-dimensional illusions with light, the works of Anthony McCall play with notions of materiality and space.