London-born Miles Aldridge is an iconic fashion photographer, perhaps best known for energetic pop-coloured shoots that, in David Lynch’s words, represent a “hard-edged reality.” However, Lyndesy Ingram gallery, London, hosted a new show featuring polaroids collected over two decades from behind the scenes of his constructed sets and bold compositions. Representing a different aspect of the photographer’s oeuvre, the collected works are a tangible record of his portfolio-in-progress, documenting Aldridge’s love for film in response to the digital age. We talk to the artist about how the photographs act as a test-shot for his stunning imagery and how the physical product mediates in contemporary culture.

A: These images are completely different to your other works: how do you think this series compares to your bright and colourful staged photographs?
MA: Rather than being a separate series, the Polaroids are a behind-the-scenes look at these shoots. I still only shoot on film so Polaroids give me an idea of what the result will be. It’s never the same as the image I capture on film as the Polaroid is always less vibrant and sharp. However, it’s the best way to ensure the light, colour and pose are perfect. I have now accumulated two decades’ worth of these Polaroids.

A: Is there a sense of nostalgia or memory connected to documenting fashion shoots?
MA: I’m not thinking about nostalgia when shooting but certainly references to my childhood, such as the colour of my mum’s tights, might come into play when setting up the scenes for fashion shoots.

A: Do you think that you hold any intention at all to create something physically tangible in a world that is accelerating into technology?
MA: Yes! I will always prefer seeing one brilliant print hung in a gallery than the sea of uninspiring images that we are confronted by on Instagram etc, so I do think about the physicality of my photos.

A: Could you talk about how the Polaroids seem to add another layer of depth to your shoots; is there a sense that through a different lens we are invited into another world of perception?
MA: I use the same camera, but with Polaroid rather than print film. The point of the Polaroid is to experiment, to manipulate the scene quickly and try out changes before shooting with the print film.  However, the Polaroids in Please Return Polaroid have taken on a new life beyond their preparatory intention.  The unintended and sometimes inexplicable ambiguities create an abstract, cinematic narrative of their own.

The trick is to get a perfect final shot as a result of the Polaroids, but sometimes it’s not that simple and you get a better Polaroid!

A: Could you talk about your relationship to photography as an art form; how do you mediate between the tension of analogue and digital media?
MA: I’ve long been suspicious of digital photography, believing that the ease with which it can be created means it doesn’t have that same artistic quality. I have recently starting experimenting with a digital camera though and have really enjoyed the results… However, film is always better!

A: What are your plans in terms of projects for the next 6 months?
MA: Over the next 6 months I am booked to work with the Almeida Theatre photographing not only all of the production images but also all the rehearsal photos too. I’ve recently shot Richard III with Ralph Fiennes and Vanessa Redgrave and I have two more productions ahead of me! 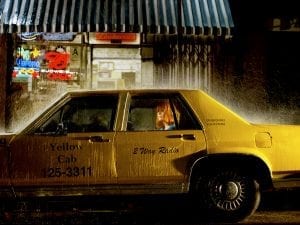