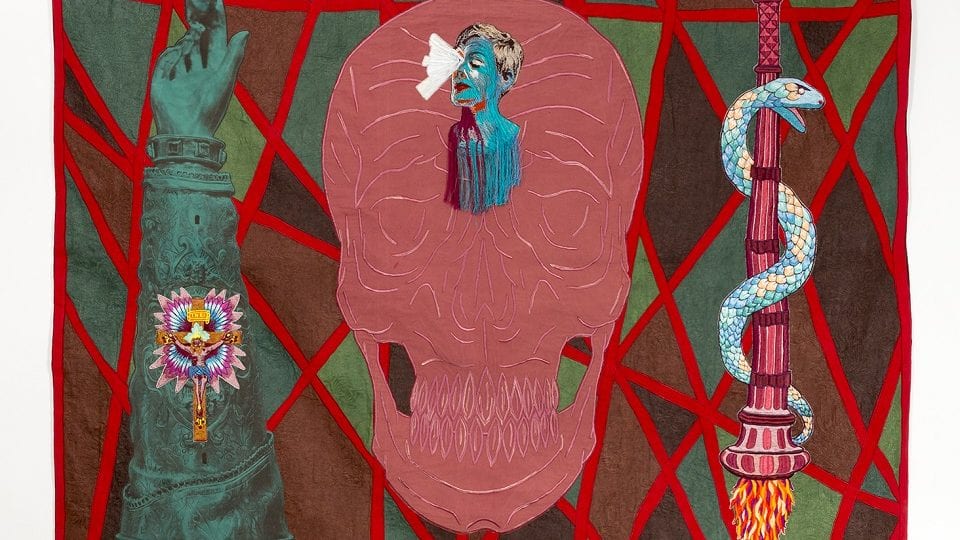 Young British artist Henry Hussey contributes to contemporary textile art with his unique use of fabric to reflect on his complex personal relations with anger, fear, power and control. Having graduated with a BA from Chelsea College of Art followed by an MA in Textiles in 2013, the artist has shown his unique works nationally and internationally over the past years.  In a new solo exhibition at Gallery 8, these personal issues will be the subject along live performances that enliven the artist’s visions.

Exploring personal forms of expression, Hussey writes on textile in the form of diary entries informed by three key inspirations from his life. They reflect the artist’s relationship with his father, dealing with death and memory and the aspiration to grow political awareness. Battling and rectifying these experiences through the medium, the artist describes the making of such works as cathartic and refers to the directness and honesty with which he approaches the complexities of his familial relationships. Working with a range of traditional and contemporary processes such as embroidery and digital printing to give his works a tangible quality, he also collaborates with actors to capture genuine emotions and find new inspiration.

Hussey’s main series in the exhibition Reliquaries is linked to his perception of nostalgia and grief. As such, the works on display demonstrate how personal reflections, whilst fragmented, can retrospectively form a whole. Using them as expressive tools, the materials in this series are more significant than ever as they hint to Victorian mourning clothing, jewellery and home interiors as means of respect and reminiscence.

In contrast, Hussey’s series Locking Horns, another body of work on show, solely focuses on emotions tied to his sense of familial identity. Delving even deeper into his own contexts, Hussey tells the story of finding out that his father secretly had two families. Without either of the families knowing of each other, the shock inspires the artist until today to transform his anger into the memoir-esque sections of stitched text that come with powerful and times violent imagery. Key pieces which represent this translated experience include Eclipse and Betrayal.

Seeking genuine responses to his artworks, Hussey has teamed up with actress Maxine Peake who enacts The Last Breath. “The pathos she can convey is incredible. Maxine not only embodies the spirit of the work, but working with her inspired me to develop new areas of work and inspiration. The growing political comment in some of the works arose directly from our partnership”, he says of Peake.

The sessions with her allowed the artist to capture physical responses to his works through sketches, photographs and sound, by specifically watching emotional intensities. In terms of addressing new social and political issues, Hussey’s latest practice moves into addressing the idea of a divided, fractured England following the collaboration.

To see more of his artworks: www.henryhussey.co.uk 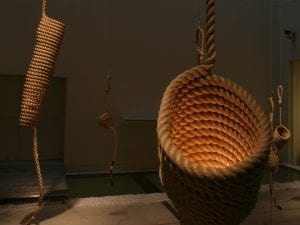 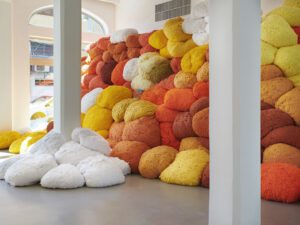 The Thrill of Colour 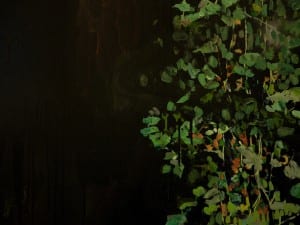 Interview: Dean Melbourne, This Myth at Gallery 8, Curated by Coates and Scarry

Dean Melbourne unveils his second solo show in London this February at Gallery 8. Curated by Coates and Scarry, the exhibition showcases Melbourne’s most recent paintings and works on paper.