Following in the footsteps of great American colourists such as William Eggleston and Stephen Shore, Belgian photographer Harry Gruyaert was one of the first European artists to take advantage of the creative potential of colour imagery. Western and Eastern Light, Gruyaert’s debut exhibition at Michael Hoppen Gallery, examines the breadth of the Magnum photographer’s portfolio.
Travelling extensively from the comfort of his Volkswagen Kombi for 30 years, Gruyaert’s oeuvre presents striking and diverse documentation of places and people throughout Europe, North Africa, the Middle East and America.

As well as the 1960s colourists, Gruyaert was influenced by the emergence of the Pop Art Movement in New York. His filmic, jewel-hued scenes promote the power and motion of colour in a two-dimensional format; at times the intense shades are suspended in a flurry of movement, and at other times, they are thick with suspense. Through his densely layered and painterly compositions, Gruyaert produces a vibrant and enigmatic dialogue with elements such as texture, light, colour and architecture.

The images selected for Western and Eastern Light draw distinct chromatic parallels between disparate locations: scenes of automobiles lit by sunset tones in Los Angeles are compared and contrasted with the earth-coloured walls of buildings in Ouarzazate. Promoting the importance of colour and composition further is each photograph’s negation of its sitter or sitters’ identities. The faces of each individual are often concealed by objects, shadows or angled shots; their personas hinted at by their contextual surroundings. 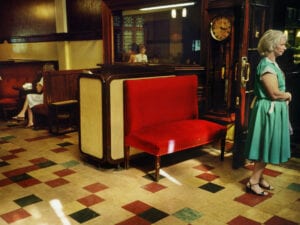 “I am interested in that strange magic that occurs when things come together.” Harry Gruyaert’s painterly images of Ireland burst with colour. 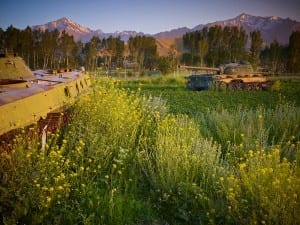