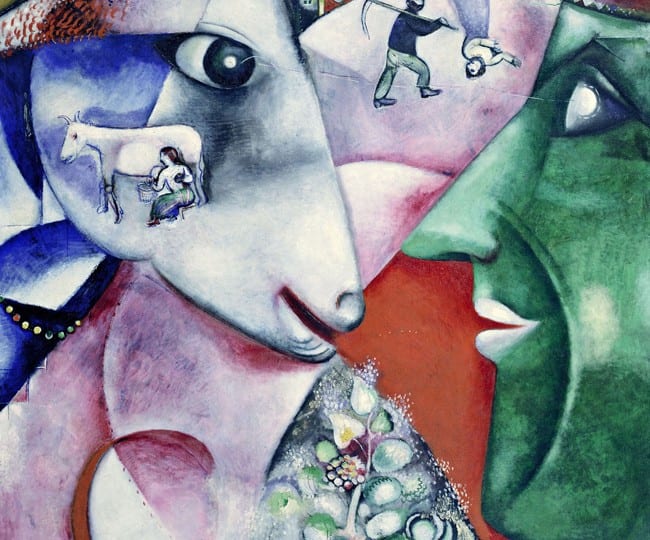 An extensive collection of works executed throughout the life of Marc Chagall (1887-1985) is given refreshed perspective at Liverpool Tate. Dream-like visions with subjects and imagery frequently derived from Jewish and Russian folk-art greet the visitor. The dream-like qualities consist in violations of the laws of perspective and the laws of gravity to name but two. While the bold use of colour attests to the early introduction to and influence of fauvism on the artist, his move to Paris in 1911 saw experimentation with cubism. This broad perspective on his life and work is given in some detail at Tate Liverpool, with such influences drawn. Later, following the chronology physically through the course of the exhibition, his move back to Russia sees an introduction to constructivism. Disputes with Soviet artists result in a return to Paris and French citizenship eventually being granted. Personal joy is to be found, along with early anguish.

The dream-like qualities of the works exhibited are given context through the highlighting of influences from Chagall’s personal life and from modernist movements. Broader context might have commented on the influence of Freud, and Freudian dream analysis, on 20th century discourses. This would, of course, have been too broad and general (perhaps all in the 20th century can very broadly be given context with the terms ‘repression’ and ‘ideology’).

The employment of bold colour is to be viewed throughout. The earlier work in the exhibition sees Birth as subject. Birth (1910 and in 1911) speaks of the universal catharsis of the event and raw exhaustion. Somewhat irksome, and highly effective in making deep impact, is the combination of profound subject matter with a naïve aesthetic stylistically. This is a continuity throughout the exhibition and, presumably, Chagall’s work on the whole. The ‘double-take’ effect is striking in this way. The Poet with the Birds (1911) shows the first example in the exhibition of a theme to be found in much of Chagall’s work: the poet reclining.

Naïve Russian folk-art is taken together with formal European modernism in The Yellow Room (1911). The laws of nature, at least in four dimensions, are abandoned in The Green Donkey (1911). Pictorial space is given ambiguous treatment here in the use of flattened forms. Half Past There (The Poet) is a portrait of the Russian poet, Mazim. He is portrayed seated, but with his head turned upside down. It is explained at the Tate that the ‘turned head’ – translated from the Yiddish ‘fardreiter kup’ – expresses a sense of giddiness and craziness. This device is used later in the work exhibited, as is the theme of the poet reclining. As mentioned it is an extensive exhibition. Around a third of the way through the subject is love, personal and relationships.

Most striking for its scale is the work collected from Chagall’s time in Moscow when working with the State Jewish Chamber Theatre. Large murals depict haphazard scenes. Detailed patterning sits well with and compliments constructivist, angular balance. The scale of these works, which sometime reveals pencil work, demonstrates Chagall’s natural skill.

Later work sees dream-like horror depicted. War (1964-66) portrays the horror of the holocaust with the use of flames, angels, death, a white horse and Christ crucified. This nightmare, and other later work, is darker generally, not least because of the heavy use of black paint. Darkness here contrasts starkly with bright colour, which is almost fluorescent at times. This starkness, which seems naïve at first glance, contrasts again with the darkness of the subject matter. Greater impact on the viewer is the result. 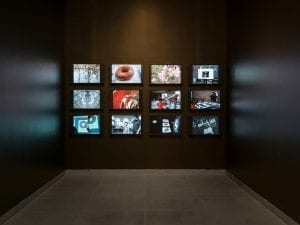 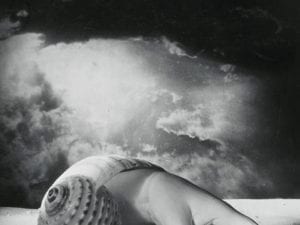 Dora Maar’s photographs are icons of surrealism. They play with the unusual, creating uncanny combinations of objects, textures and forms. 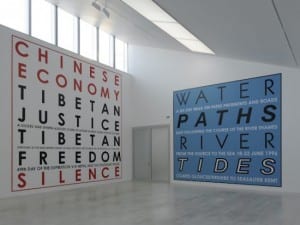