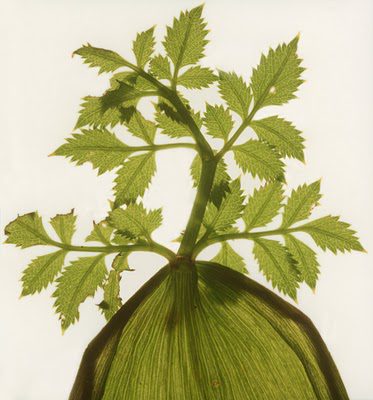 Honesty, May – September 1985, is the earliest piece in the exhibition by Garry Fabian Miller. It’s made using the dye-destruction printing process, where dyes are embedded in photographic paper, and destroyed or preserved in proportion to the image. The images in Honesty are seed-heads, arranged in a grid and seen at monthly stages of its cycle of development from left-to-right, and weekly stages of each month from top-to-bottom. The changes in colour are striking: brown in May, gorgeously sharp and green in June, faded but with tints of red in July, blackening like a virus in August and a purified dull-cream in September. Just as destruction, development, light and exposure are an inherent part of Fabian Miller’s process in the production of these images, so too are they an unmistakable part of the cycle he depicts, which gives the images a great sincerity, an at-oneness between the artist, the process and the image.

More recent work sees Fabian Miller using a similar dye destruction process to create striking and stark works of chromatic abstraction by exposing images with different durations of light. Exposure (12 Hours of Light) from 2005 is a large thin red ring drawn over 9 black rectangles. The eye is drawn to the fuzzy margin where red meets black, and the counter-intuitively smooth cohabitation of shapes: circle and rectangle. The Night Cell (Winter 2009-10) is a blue circle on a darker blue rectangular background, pocked by bursting dots of light, like little starlets, or like the structures of a cell. The relation of the piece to the physical world is only one of its aspects, though, and as a work of abstraction it is tense and mesmeric, an exploration of colour, light and shape.

Susan Derges is best known for her images of water, often made by submerging sheets of photographic paper at night and exposing them by moonlight with the aid of a flash-gun. Because of the time involved in the process, her work is able to capture and explore some of water’s changing, shifting, un-static qualities. Her piece Atlantic Ocean from 1998 is two images of the tide. Viewed head-on on a gallery wall, the tide looks thick and gloopy with a powdery, sandy foam, pouring slowly, as though paint, down the packed sand. Her technique of developing her pictures by the night-sky as a natural darkroom gives her work a circularity- the focus of the picture, i.e. water and light, are also the tools of its creative development. An earlier work, Full circle 2 (1991), is a series of images of the underwater development of spawn to larval tad-pole to little frog. Particularly fascinating in these works is the mergence of a natural development process with sometimes painterly artistic composition, both of which tinged by a metaphor for the human birth-cycle too.

The Ingleby Gallery have taken the inspired decision to show these contemporary explorations of camera-less photography alongside some of the earliest pioneering photographic experiments. Most important of which is a very rare copy of William Henry Fox Talbot’s 1845 book Sun Pictures in Scotland. Peeling back the protective felt to tentatively peer at crisp and well-defined landscape images, I was pulled both ways: by the importance of sensitivity and delicacy in all these works on one hand, and the direct, confident interaction with the elements on the other. A print of a calotype negative by Fox Talbot of patterned lace dating from the early 1840s reveals the intricacies of its pattern-work and the texture of the fabric itself. Seen in the context these early examples, the works of Garry Fabian Miller and Susan Derges shine with their spirit of invention, exploration and respect. 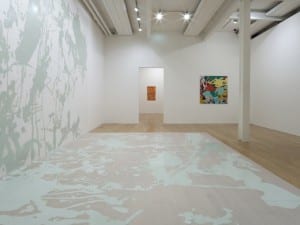 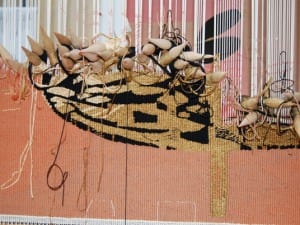 Dovecot Studios opens a new exhibition of work by Norwegian artist and musician Magne Furuholmen. We speak to Furuholmen about his move into tapestry and how Dovecot inspired the new work.