Amongst very heterogeneous “aesthetic-windows”, the abstract notions in the title are intertwine; shapes are shifted and patterns emerge, whilst figuration refers to bodies in space which come forward and recede. The works can be seen to represent the act of looking, on the parts of both the artist and the viewer.

For some of these contributors, their primary means is painting. For others, this is an aspect of an expanded practice. For example, Sadie Benning (b. 1973) quilts the context for each image, not only within the composition of each panel and the installation as a whole. The rhythm of her mural installation mimics the cuts, pans, pauses, and transitions of time-based media. Each of the panel suggests parts of a narrative, broken sentences, verses where space is held for the viewer to make their own connections, seek their own questions, as sphynx’s response on tableaux vivants. And, starting from her thrown-together multimedia layers, one could see the works for this particular show as a series of occurrences responding to certain contexts – they take place under particular sets of conditions. The assemblages are windows that grasp excerpts of the real; so far Benning follows a serious historicity. But out of relevant conventions, they truly touch upon an informal and reconstructive practice.

Staged in this way, the proscenium wall at Collezione Maramotti, becomes part of a larger conceptual landscape. As in the theatre, there is also a suspension of disbelief. Though entirely composed with paint and brush, some of the pieces appear to have been woven; thin lines threading though fabric, canvas seeming closer to linen or gingham, with its stripes, checks and plaids, basics, in fact, of geometric abstraction, and related to clothing and the body, to figuration, patterned, dyed, stitched and hand-sewn.

Exactly as Ulrike Müller reveals (b. 1971), engaging relationships between abstraction and bodies are not restricted to brush and canvas. She introduces unique materials and techniques, expanding into other realms of production in processes of exploration and exchange. Imaginary rooms are constructed: corners are affirmed whilst thick layers, dusty colours and rough geometric plates absorb liquid and reveal delicate segments.

Just as near to these kind of bi-dimensional interventions, Mamie Holst (b. 1961) invites visitors to consider the elements that compose her hypnotic black and white plates. Universal interventions integrate surfaces as pictorial motifs, with Empâtement alongside pointillism as just a few of her techniques whilst liquidity and dissolution are but a few of the residing characteristics. Using a very diverse pictorial vocabulary, the images are incredibly singular, centred and personal.

Figurative Geometry evokes an evolving process that gives a better understanding of painting gestures. Layer after layer, each creation is self conscious of the time necessary to reach completion, resulting in a prismatic and welcoming introspection for all audiences. 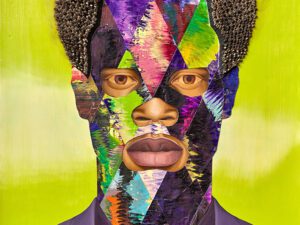 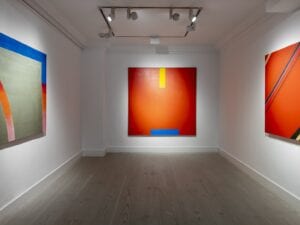 How can painting reflect the mood of an era? This is the question at the heart of Gazelli Art House’s exhibition, exploring 1960s painting in the UK and US. 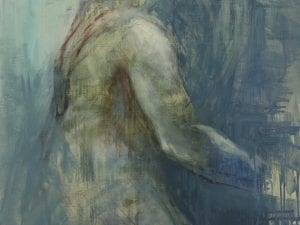 Jean Davis paints abstracted figures placed in ambiguous settings. Her work focuses on themes of the impermanence of place and uncertainty of perceptions.