More than thirty works selected for Pontifex Maximus exhibition  represent an eloquent synthesis of an artistic research, accomplished during a career that spans more than twenty years, as well as a respectful and scholarly tribute to classical iconography, which has inspired a specific Russian artist ever since his early training.

In Naples, Alexey Morosov (1974, Frunze, Russia) has designed and realised a complex of sculptures, as a site specific installation, in order to bridge the classical and the contemporary as well as the east and west culture, realising an exhibition as a co-production by Moscow Contemporary Art Museum and Naples National Archaeological Museum, with the patronage of Ministero dei Beni Culturali. Pontifex Maximus finds its enhancing location, among some of the world most important collections of classic art, expressing simultaneously with Myth and Nature (showed at the same time in the Museum in Naples and in Pompei), affinities, contrasts, concepts and iconographies.

Morosov gives sculpture an analytics value, able to translate thoughts and perceptions into plastic forms, recapturing an ancestral ritual and spiritual value of art. The artist’s works retain a formal balance and a harmony of composition, direct filiation of classical and Renaissance art, which, innervated by contemporary technological elements, extends the Hellenistic desire to represent the spirit of the present times, hidden beneath the world’s chaos. The endurance of classical oeuvre over the millennia, as evidenced by the works on display in the Museum, challenges time and confers a symbolic value of longevity, of authenticity and a spirit of survival, together with the capacity to transmit memories and knowledge, serving as a foundation for a harmonic synergy with the contemporary elements.

In the Archaeological Museum the installation strives to activate the space, establishing a dialogue not only with the volumes and the light, but also with time, in its historical, anthropic and artistic stratifications, as well as with respect to its rituals and social functions, confirming the assumption that art can colonise any space. Sculptures like Hexagone_Kouros_Apollo in front of CURRUS II, next to Cantata_iTunes or a very disquieting Tarquin le Superbe, all made of bronze, represent an iconographic transition and integration between manual labour and technological intervention. The bronze sculpture are produced in Pietrasanta, using the artisanal technique coming from classic tradition.

Morosov imposes an in progress strategy also applied to the use of materials, combining classic media with technological materials of an industrial nature. Marble, for example, represented by the Caryatid Supersonic sculpture, is accompanied by an artistic and historical significance and a mnemonic stratification that strongly influences the fruition of the works, above all stimulating the artist to dialogue with this prerogative and to assess the expressive potential of the material. Integrating it and directing its transition towards contemporary iconography, without derogating from the hieratic nature of the historical significance.

The histrionic setting of the works within the installation suggests a conceptual connection, with the fruition of possible relations between iconography, history and memory and the very same museum- institution, creating a veritable museum narrative. A dialectic that also involves both an idea of art, as well as an idea of institutionalisation of fruition, thus referring to a structure that is physical while at the same time representing a reading hierarchy, offered by the interpretive dynamics structured in the museum itself.

That’s why the sculptures and paintings of the Russian artist, keep the original attitude of classic and Greek culture, in order to represent the hidden pattern lying behind the chaos of the universe. Morosov takes the classic iconography from the past, installing it in a sort of an out-of-time scenario, in order to talk about the present in a visual manner. Even the selection of the materials follows this criterion, blending art works made by bronze and marble as in the classic tradition and some made by new materials and techniques made available by new technologies. The designs and the 3D pre-visualisations coexist with the castings in bronze or other metals, starting from matrices made from the models (in clay, plaster or wax) to which Morosov adds other plastics workmanship with new synthetic materials including fibreglass, carbon fibre, latex, etc. Through this process the work of art manifests its independence to let emerge a viewer narrative that evolves through a real sculpture’s experience. 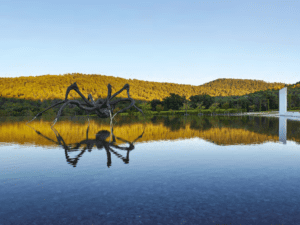 A new publication explores Provence’s open-air museum, which is home to some of the biggest names in contemporary art and architecture. 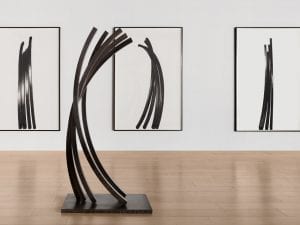 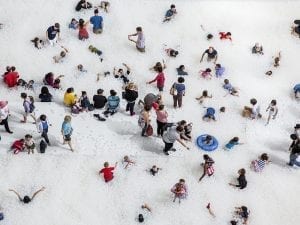