30 Years in the Art World

In 1990, the art world was entering a new era. Audiences had just been introduced to the Young British Artists – including Tracey Emin and Damien Hirst – whose explosive rise to fame became synonymous with shock, controversy and rule-breaking. Mobile phones and the Internet were set to revolutionise the ways in which we live, work and play – inspiring a burgeoning wave of digital creatives, multimedia experiences and 2021’s NFT boom. The advent of social media would make art more shareable than ever before; “Instagram-able” art installations by Yayoi Kusama, for example, would break attendance records.

Pashmin Art Consortia has seen it all. This year, the international art company celebrates its 32nd anniversary. Set up in 1990 by Nour Nouri with a view to celebrate German artists, it now has five galleries in Hamburg, Bad Tölz, Shanghai, Beijing and Chongqing. Today, it champions creatives from across the globe. Pashmin Art also runs a publishing house, management agency, online magazine and platform for emerging talent – harnessing multimedia to bridge geographical borders and push the boundaries of what “exhibition” can look like. Alongside a growing programme of touring shows in the US, Europe and China, its goal is to launch an online Art Shop – a retail space for collectors to support the next generation.

Creatives represented by Pashmin Art include self-taught sculptor Daniel Fuchs, who creates highly complicated works by carving German spruce wood. Swirls of pink, red, green and yellow seem to move in front of the eye, falling over each other in waves. Elsewhere is Alexander Krivosheiw, whose large-scale bronze and aluminium sculptures reach heights of up to 18 feet. Smooth, reflective gold surfaces twist and fold – creating eye-catching abstract shapes. Krivosheiw was a collaborator of leading American Pop Art painter Tom Wesselmann (1931-2004). As a result, numerous eye-catching wall reliefs from this period now reside in permanent collections of renowned museums worldwide.

Finally, shown above and at the top of the page is work by Ren Rong – a multidisciplinary artist living between China and Germany. Rong’s body of work includes outdoor installations and sculptures – many of which are made from iron, stainless steel, wood and paper. These works are driven by an interest in nature, humanity and the forces which connect living beings on Earth. The above image brings the outdoors inside. Hundreds of metal shovels – each engraved with a facial expression – cascade up gallery walls and away from a central metallic orb, balanced on a bed of rocks and plants. 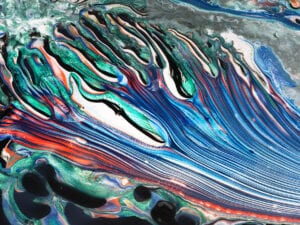 Circles of red, swirls of yellow, splashes of green. Colours blending, separating and pooling. These are kaleidoscopic works by SPONK. 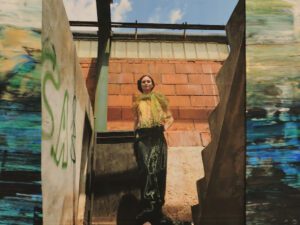 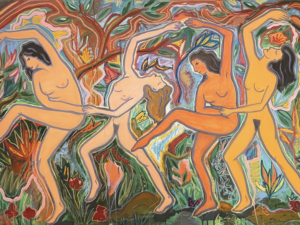 Art and science are often viewed in opposition. But Kendra Troschel believes in their similarities: working as a microbiologist-turned-painter.