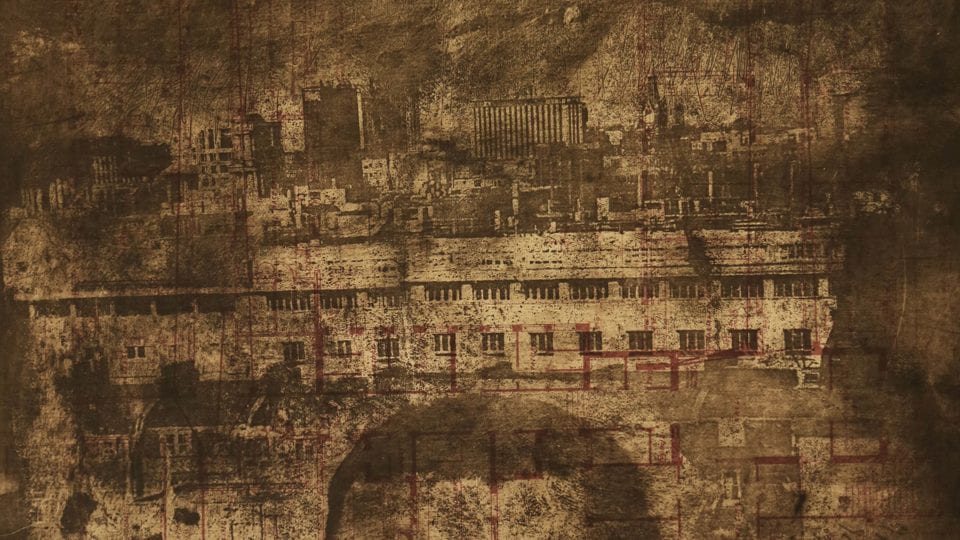 Hilary Powell’s works comprise often overlooked processes, materials, people and places. Moving in and out of scrapyards, academia, demolition sites and chemistry labs, she is fascinated y the behind-the-scenes infrastructure of our lives. Her work Demolition: A Portrait (salvaged faces and materials) (2015) was longlisted for the Aesthetica Art Prize 2016. We interview the artist about her oeuvre and techniques.

A: In your practice you have moved through different spaces and communities, from academia to scrapyards and demolition sites; a chemistry lab to a print studio. How have these varied environments informed your work?
HP: Each place is site, source and resource for new knowledge and collaboration. The work comes out of the specifics of each space or community. For the Urban Alchemy project the scrap yard and demolition site were the starting points for material and subject. Further shared expertise and time to develop the work came from situating myself in Chemistry lab and print studio. There is an ongoing process of unexpected meetings and exchange and each project brings together different communities and fields of expertise to varying degrees.

A: You often pair traditional processes such as print making with modern industrial materials like zinc found on city rooftops and defunct architectural plans. How have these combinations between old and new, handmade and industrial informed your practice, both in devising and executing ideas?
HP: It began with a previous project in which I designed and devised a production line for the making of a pop-up book animating a hidden history of the Lower Lea Valley / London Olympic site. This took the traditional, low tech and tactile medium of the pop-up book as a way to examine urban change and industrial history. The project involved taking over a former industrial space in East London to create a working production line producing limited edition books and in the process shared practical skills and local knowledge. This use of traditional hand-crafted processes and shared, skilled manual labour provoked thoughtful ‘hands on’ engagement with both production and subject matter. In the urban alchemy project the practicalities of material transformation became a microcosm of the issues of wider urban transformation the work explores.

A: In Demolition: A Portrait (salvaged faces and materials) (2015), where a portrait of an anonymous demolition workman is superimposed upon a cityscape, you intrinsically link the human and the material worlds. In pairing the two what message is your work trying to convey?
HP: The typical faces of regeneration are those that clad the hoardings hiding the actual physical change this entails – fictionalised future perfect residents of ideal show homes and utopian communities. My work is consistently about working with overlooked or undervalued processes, materials and also people.  With the exception of the occasional high profile spectacular demolition by dynamite, demolition often goes unnoticed and demolition workers are treated as the poor cousins of the construction world. I wanted to put a face to urban change, to the thousands of (mainly) men coming from all over the country and world who shape our cities around us without us noticing.

Zinc too has its own global story involving thousands of people and an epic journey before it arrives on the rooftop and a parallel part of this project was a series of material stories gathered in Urban Alchemy  – a book going behind the scenes into the poetic and political narratives of the stories of the materials that surround us everyday.

A:You talk about how your work is inspired by and comprises of overlooked and undervalued processes, materials, peoples and places. In shining a light on them how would you like the viewer to respond?
HP: To look again at that which surrounds us everyday and which we often take for granted – from the zinc that protects our rooftops to the people who knock down walls.  In it all there is a strange but potent tenderness, even love for materials, places and people. Essentially it is about value – what we choose to or are taught to value and how we might rethink that value system.

Agnes Varda’s film The Gleaners and I remains a key influence as she travels France charting the origins and contemporary manifestations of gleaning – to gather after the harvest. Traditionally this is the harvest of the fields but is also applied to the leftovers of capitalist society I deal with from junk on the streets to the marginalised and forgotten and covers both a question of survival and also a creative salvage operation.

A: Urban themes feature as an important inspiration, providing a place of change, transformation, creation and destruction. Can you talk about urban landscapes and why they continue to inspire your work?
HP: The urban landscape is in a constant state of flux and in every site micro and macro politics play out. Working on many projects around the London 2012 Olympic project this was made more acute as place and power interact and resist.  Here, as in all urban landscapes there are multiple layers of deep and recent history erupting into and impacting on the present. The urban landscape itself is not a backdrop to events but a key character in them and I am interested in how stories are told and narratives built around place. In a city of stories it is important to seek out those destined for erasure, to ensure other voices and visions resound that aren’t either led by the profit agenda or silenced by capital. 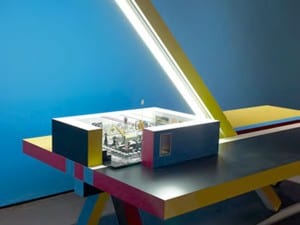 Air de Paris unveils their new exhibition C’est Wouf ! by M/M (Paris). Art as practised by M/M(Paris) is a cumulative affair, spreading from medium to medium in a process of endless expansion. 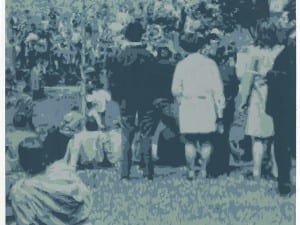 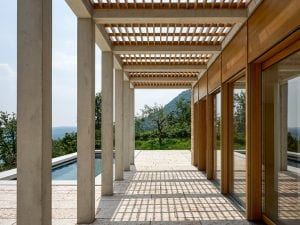